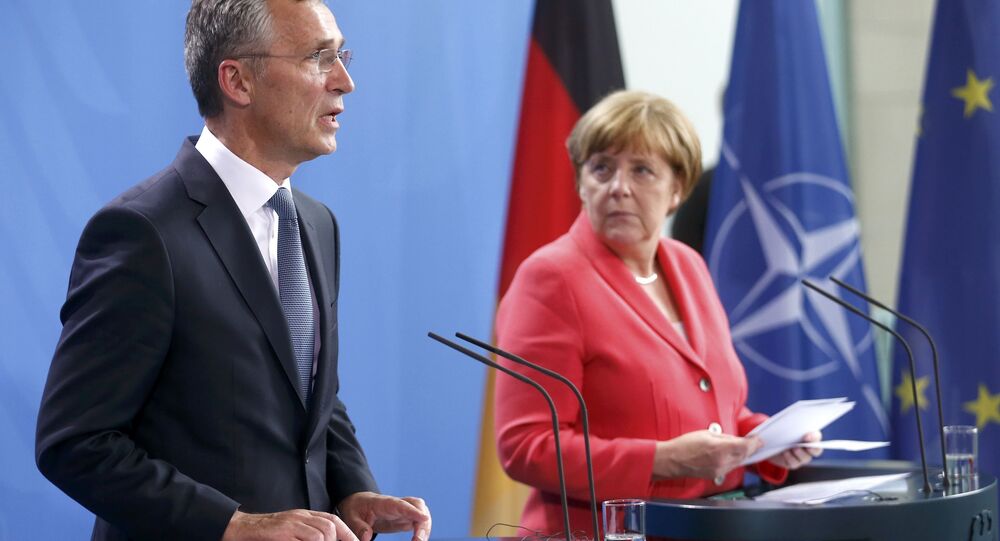 German Chancellor Angela Merkel has called for a NATO-Russia Council meeting ahead of the military alliance's July summit in Warsaw as she reiterated her wariness over the build-up of NATO forces in Eastern Europe and the Baltic States.

© REUTERS / Philippe Wojazer
NATO Missile Defense in Europe Deployed Not Against Russia - Hollande
Speaking at a joint news conference in Berlin, with NATO Secretary General Jens Stoltenberg, Merkel said it would be "desirable" to hold a NATO-Russia Council meeting before the main NATO summit in Warsaw in July.

In particular, she referred to the NATO-Russia Founding Act from 1997, which states that "the alliance will carry out its collective defense and other missions by ensuring the necessary interoperability, integration, and capability for reinforcement rather than by additional permanent stationing of substantial combat forces."

Merkel said the Founding Act was an "important document" that Germany would "not violate". Her comments come amid divisions within NATO over the deployment of four rotating battalions in Eastern Europe.

"We are currently reviewing how we can continue our engagement and perhaps even bolster it… in order to ensure the security of all (NATO) states, particularly in the east. However, I personally always stress that it is very important to us that we act within the framework of the NATO-Russia act," Merkel said during an earlier press conference in April.

NATO has been gradually building up its forces in Europe for over a decade, but has recently undertaken a huge increase in its presence in the Baltic region and Eastern Europe.

#NATO’s mission in a dangerous world is to strengthen our collective defence & project stability beyond our borders. pic.twitter.com/urWbMIdcIt

The NATO Response Force (NRF) was originally set up following the Prague summit in 2002 as a multinational force made up of land, air, maritime and Special Operations Forces (SOF) that could deploy quickly.

Since then, there has been a steady build-up of forces, particularly around Russia. NATO Allies decided to enhance the NRF in 2014 by creating a 'Spearhead Force' within it, known as the Very High Readiness Joint Task Force (VJTF).

In November 2015, the leaders of Lithuania, Latvia, Estonia, Bulgaria, Hungary, Romania, Poland and Slovakia have called for an increased NATO presence in Eastern Europe and the Baltic.

Polish Defense Minister Antoni Macierewicz said May 31, that the decision to deploy four NATO battalions in Poland and the Baltic states has been already made and that only technical details were left to discuss.

"Our conversation confirmed that four combat battalions on a rotating basis, which would represent an important element of NATO's expanded permanent presence in Eastern Europe, would be deployed in Poland, as well as in Baltic states," Macierewicz said during a meeting with NATO Secretary General Jens Stoltenberg, as quoted by the local TVN24 broadcaster.

NATO Parliament Has 'No Choice': More Troops to Eastern Europe, Yet Again