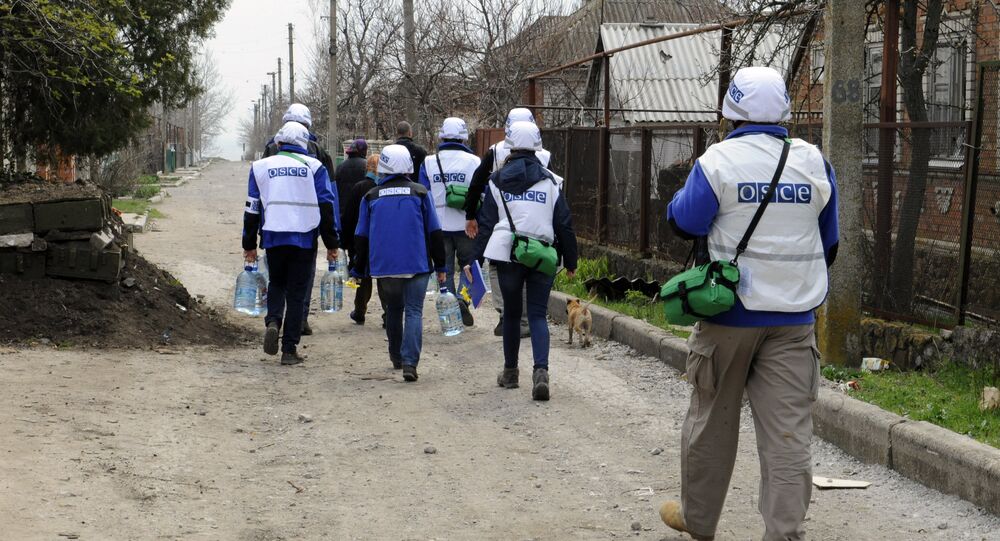 In early May, the Normandy Quartet, comprising foreign ministers from Russia, France, Germany and Ukraine, resolved to support the disengagement of forces along the line of contact between Ukrainian army forces and eastern Ukrainian pro-independence militias. At the close of the meeting, Frank-Walter Steinmeier stated that this should be carried out with a view to create demilitarized zones concrete boundaries and deadlines.

"The SMM has supported the idea of disengagement and is ready to work with the sides towards it…One could start this process with places with less complex situation, for example, Stanytsia Luhanska and Zolote-Popasna in Luhansk region. Most violence in Luhansk region occurs in these places," Hug said.

© AP Photo
OSCE Needs Proper Security Conditions to Send Election Observers to Donbass
Disengagement would reduce tensions and the risks of violence as the factor of the sides' proximity to each other would be removed and thus ease the situation faced by civilians living in these areas, he stressed, adding that disengagement from checkpoint areas would open up routes.

Kiev launched a special military operation in Ukraine’s southeast in April 2014, after local residents refused to recognize the new Ukrainian authorities that came to power as a result of a coup.

In February 2015, a peace agreement was signed between Ukraine’s conflicting sides in the Belarusian capital of Minsk. The deal stipulates a full ceasefire, a weapons withdrawal from the line of contact in eastern Ukraine, an all-for-all prisoner exchange and constitutional reforms, which would give a special status to the self-proclaimed Donetsk and Luhansk people’s republics in the southeast.