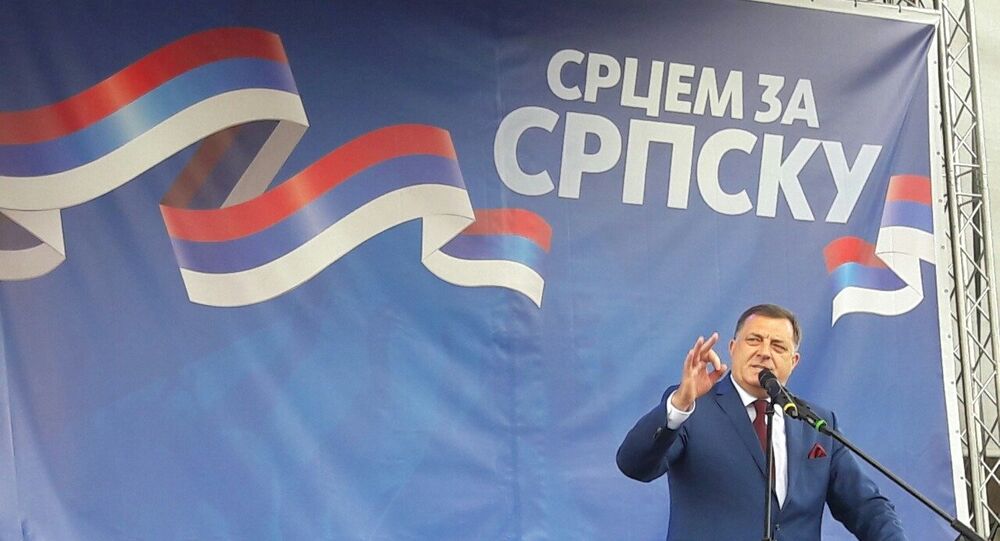 The legal and constitutional entity of Republika Srpska, within Bosnia and Hercegovina, is under threat from foreign interference which seeks to change the terms of the Dayton Peace Agreement that was signed by all parties in 1995, RS President Milorad Dodik told the Serbian government and media in Belgrade on Tuesday.

© REUTERS / Robin van Lonkhuijsen/Pool
Karadzic Sentencing Designed to ‘Delegitimize’ Republika Srpska
The President of Republika Srpska, one of two constitutional and legal entities that comprise the state of Bosnia and Hercegovina, has told the Serbian government that his administration requires support from Belgrade in the face of threats to the entity's existence, Serbian broadcaster RTV reported.

"Republika Srpska has always faced the danger of disappearing, and that danger clearly exists today. I have just had a meeting with (Serbian Prime Minister) Vucic and I told him clearly that I expect Serbia to back up Republika Srpska come what may," said Dodik on Tuesday at a conference in Belgrade organized by the Center for International Cooperation.

Dodik raised his concerns about the consequences of the EU's migrant deal with Turkey for the existence of Republika Srpska, because the talks give Ankara, which is seeking to strengthen its ties with Muslims in Bosnia and Hercegovina, significant political leverage in return for controlling migration across its borders.

"We are the collateral damage of Europe, which can't integrate one and a half million refugees," Dodik said, and expressed concern that calls from Bosniak politicians, who enjoy the backing of Turkey, to change the terms of the Dayton accord will result in the weakening of Bosnian Serbs' political and legal rights.

Ankara "has always involved itself in Bosnia and Hercegovina, and always on the side of Muslims," Dodik said.

Last month former Turkish Prime Minister Ahmet Davotuglu visited Banjaluka, Bosnia and Hercogovina's second largest city after Sarajevo and the largest in Republika Srpska, for the reopening of the city's Ferhadija Mosque, which was destroyed in 1993.

Davotuglu caused a stir in the region with his speech, in which he said that Bosnians have "78 million friends," and that millions of Turks "were here, are here now and will always be here."

At the forum on Tuesday Dodik also complained that the activities of the Office of the High Representative for Bosnia and Hercegovina, an ad hoc international institution created under the framework of the 1995 Dayton Peace Agreement, are undermining the contents of the accord, which he said have consequently become a "caricature."

The National Assembly of the Republika Srpska has repeatedly complained of bias against Bosnian Serbs in the justice system in Bosnia and Hercegovina, and last year voted to hold a referendum on the work of the Constitutional Court.

Last year the Bosnian member of the country's three-member Presidency, Bakir Izetbegovic, appealed to the court to veto Republika Srpska's decision to hold a national holiday on January 9, and in November his complaint was upheld by a majority (five – three foreigners and two Bosnians) of the court's judges.

"This decision was reached under the influence of international judges, which confirms that the Constitutional Court is not independent and autonomous, and we reject any kind of foreign interference in the court process, as well as pressures from international representatives that this decision be implemented," stated officials from Republika Srpska, and reiterated their intention to ballot the entity's residents on whether they agree to accept the Constitutional Court's decision.

Karadzic Sentencing May Cast Doubts on Future of Republika Srpska