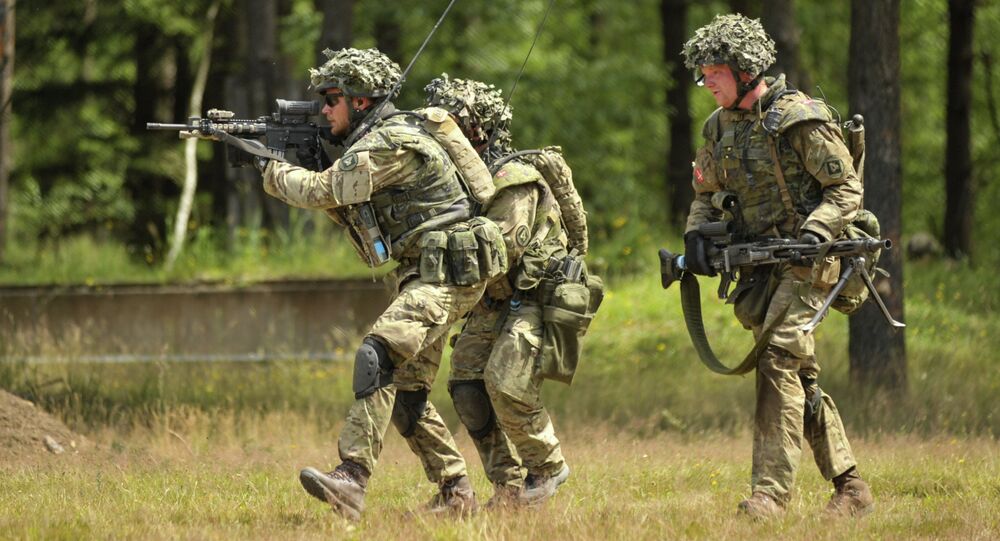 Following the latest standoff between NATO and Russia, fuelled by the West's incessant anti-Russian paranoia and dismal post-Cold War legacy, pressure has been mounting on the NATO members to pump up their military expenditures.

© AP Photo / Vadim Ghirda
Sitting Ducks: Why NATO's Growing Presence in the Black Sea Won't Change the Strategic Balance
However, this is a case where the figures speak for themselves. According to the International Institute for Strategic Studies (IISS), Russia spent 70 billion dollars on defense in 2014, whereas the US spent 581 billion dollars on its military. Add Germany's 44 billion, the UK's 61 billion and France's 53 billion, and you are getting close to the real picture.

The West's perennial arguments for the arms race are Russia's alleged bloodthirstiness and the weakness of NATO's eastern flank. The RAND Corporation, an American global policy think-tank, conducted several simulations of a Russian invasion of the Baltic states and arrived at an inauspicious conclusion: NATO is unable to protect its members, who supposedly run a great risk of a Russian invasion. According to the RAND Corporation, it would take Russia a mere 60 hours to march into the capitals of Estonia and Latvia.

According to Michael Jarlner of the Danish newspaper Politiken, this is an echo of the Cold War. The RAND Corporation operates with full support of the state and was founded by the Douglas Aircraft Company shortly after WWII (one of the predecessors of the aerospace company McDonnell Douglas). The majority of its 1,700 employees are US State Department officials, so the think-tank is all but "unbiased."

On a funnier note, the German magazine Der Spiegel recently noted that it was one of the RAND Corporation's more legendary researchers, nuclear war theoretician Herman Kahn, who served as the primary inspiration for film director Stanley Kubrick for his caustic Cold War satire "Dr. Strangelove."

© REUTERS / Lehtikuva/Elias Lahtinen
Suomi Sycophants: Finnish Foreign Minister Hails US Baltic Build Up Again
​After the end of the Cold War, when many prematurely regaled the coming of what political scientist Francis Fukuyama called "The End of History", many started to wonder if NATO was necessary. According to the organization's own website, throughout the entire period of the Cold War, NATO forces hadn't been involved in a single military engagement. However, the organization found its footing intervening in the internal affairs of countries like Yugoslavia, where a 1999 bombing campaign resulted in hundreds of civilian deaths and the decimation of much of the country's infrastructure.

After Russia regained its footing economically in the 21st century, organizations such as RAND put the alliance at the center of the entire Western defense system, opposed by an increasingly "aggressive" and "unpredictable" Kremlin. The point of this rhetoric is to coerce European policymakers into increasing their military spending.

In the case of Denmark, the Kingdom's military expenditures dropped from 2.1 percent of national GDP at the end of the Cold War to 1.18 percent in 2015. At the same time, the Danes are being continuously indoctrinated with the idea of a Russian threat. The country has successfully created the enemy's image; this is essential, as it hopes to coax citizens and taxpayers into supporting the military with more and more money and preparing for engagement in NATO's anti-Russian procedures. Currently, Denmark is preparing to contribute 150 soldiers to the defense of Estonia against its eastern neighbor.

© Flickr / Airman Magazine
Flying a Kite: Epic F-35 Deal Leaves Denmark Vulnerable and Penniless
But is there really any common sense in the very idea that Russia is asking for trouble? US military analyst Michael Koefman is among those who do not understand why Russia would ever invade the Baltic countries in an unnecessary conflict with NATO.

"It does not make any sense for Russia to conquer the Baltic states to show NATO's weakness," Koefman said, as quoted by the Danish newspaper.

Nevertheless, European politicians in general and Danish ones in particular keep touting the far-fetched horror scenario and putting all the wrong ideas into their fellow countrymen's heads.

Return of the Middle Ages: Danish Soldiers March Back to Estonia