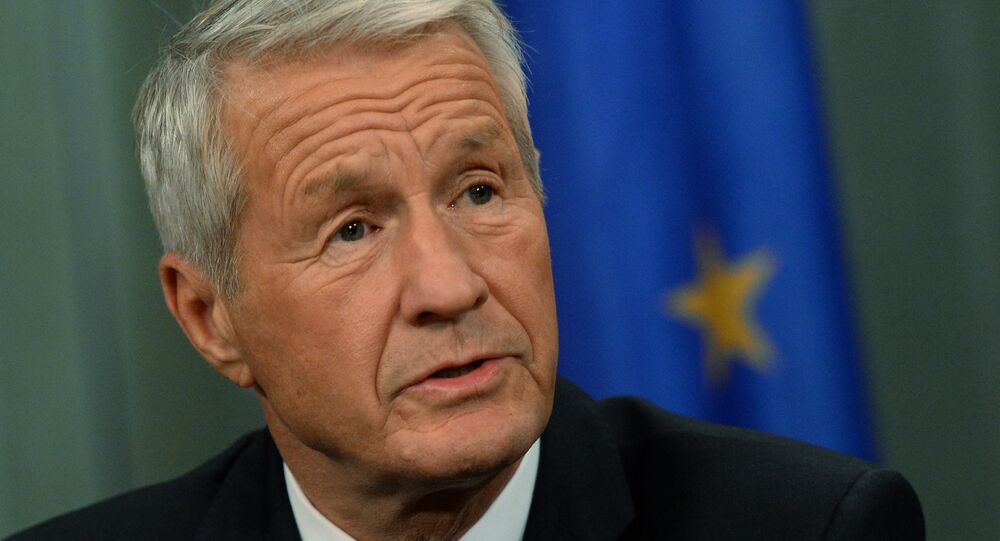 Council of Europe Secretary General Thorbjorn Jagland called on the governments of the EU members to ensure that their laws and procedures regarding the issue incorporate "adequate safeguards for freedom of expression" and do not limit the access to information granted by the European Convention on Human Rights.

© CC BY 2.0 / U.S. Pacific Fleet
Facebook, Microsoft to Lay Underwater Internet Cable Across Atlantic
MOSCOW (Sputnik) — Council of Europe Secretary General Thorbjorn Jagland expressed concern over internet censorship and called on the governments of the member states to ensure that there are transparent and proportionate rules for blocking and removal of internet content, in a statement published Wednesday.

"I am concerned that some states are not clearly defining what constitutes illegal content. Decisions are often delegated to authorities who are given a wide margin for interpreting content, potentially to the detriment of freedom of expression," Jagland was quoted in the statement published on the Council’s website as saying.

Jagland also called on the governments to ensure that their laws and procedures regarding the issue incorporate "adequate safeguards for freedom of expression" and do not limit the access to information granted by the European Convention on Human Rights.

© AFP 2020 / Frederick Florin
Internet Users Avoid Searching for 'Terrorism' on Web After Snowden Leak
The statement comes after Swiss Institute of Comparative Law issued a report earlier in the day on laws and practices of the Council of Europe member states on filtering the Internet content, commissioned by the Council of Europe.

"On the basis of this study we will take a constructive approach and develop common European standards to better protect freedom of expression online," Jagland added.

The report, in particular, outlines counter-terrorism laws as a source for serious concerns over limiting the freedom of expression. According to the report, these laws often permit blocking, filtering and removal of content on the basis that is not precisely formulated. Terms such as "extremism" or "terrorist propaganda" are not sufficiently precise to be referred to as grounds for such practices, the report said.

Internet Warriors Rejoice! This Tool Helps You Win All Battles