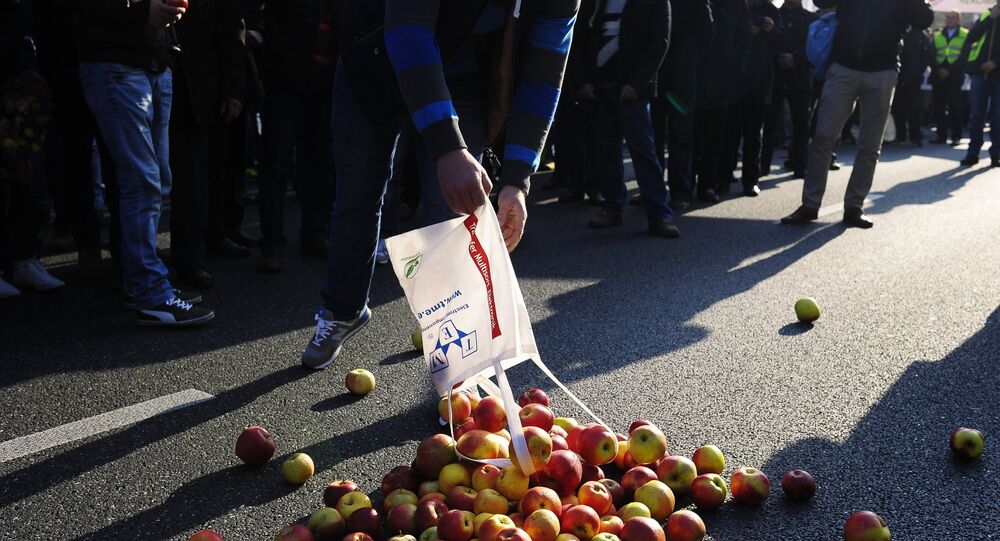 The past 12 months have seen a 29 percent drop in European Union (EU) food exports to Russia. According to World Bank estimates, the food import ban Moscow imposed on the EU countries in response to anti-Russian sanctions may put 130,000 jobs in Europe on the line, Portuguese newspaper Publico wrote.

In a report published in 2015, the European Parliament, citing World Bank figures, warned that the Russian food import ban could potentially leave 130,000 people in the EU without a job.

Even though the sectors which were hardest hit by the ban have been able to find alternative markets both in and out of Europe, local farmers still demand that the anti-Russian sanctions be lifted. Moscow had already extended its food embargo until August 2016 and may extend them even further, the newspaper stated.

The increased supply quickly has sent prices spiraling down. European milk and pork producers have also felt the pinch of shrinking markets and falling prices.

© REUTERS / Stephane Mahe
European Farmers' Protests May 'Prod EU to Scrap Anti-Russian Sanctions'
Russia remains the fifteenth-biggest buyer of Portuguese farming produce, largely due to the fact that Portuguese wine and olives are missing from the sanctions list.

Even so, last year’s exports to Russia (with the exception of factory-made foods) were down to 18 million euros – a 23 percent drop from 2014, Publico wrote.

The United States, the EU and some of their allies have imposed several rounds of sanctions targeting key sectors of the Russian economy as well as a number of individuals and entities. The voiced reasons are Crimea’s reunification with Russia and Moscow's alleged interference in the conflict between Kiev and independence militia in eastern Ukraine.

© AFP 2021 / CHARLY TRIBALLEAU
Last Straw? EU Farmers ‘Erect Barricades' to Protest Anti-Russian Sanctions
In response to the restrictive measures, Moscow has imposed a food embargo on some products originating in countries that have targeted Russia with sanctions.

On Friday, the G7 leaders meeting in Japan decided to extend their sanctions against Russia.

They stressed that the sanctions would remain in place until full implementation of the Minsk peace agreement on Ukraine, pointing out, however, that maintaining constant dialogue with Russia is crucial to the peaceful resolution of the crisis.