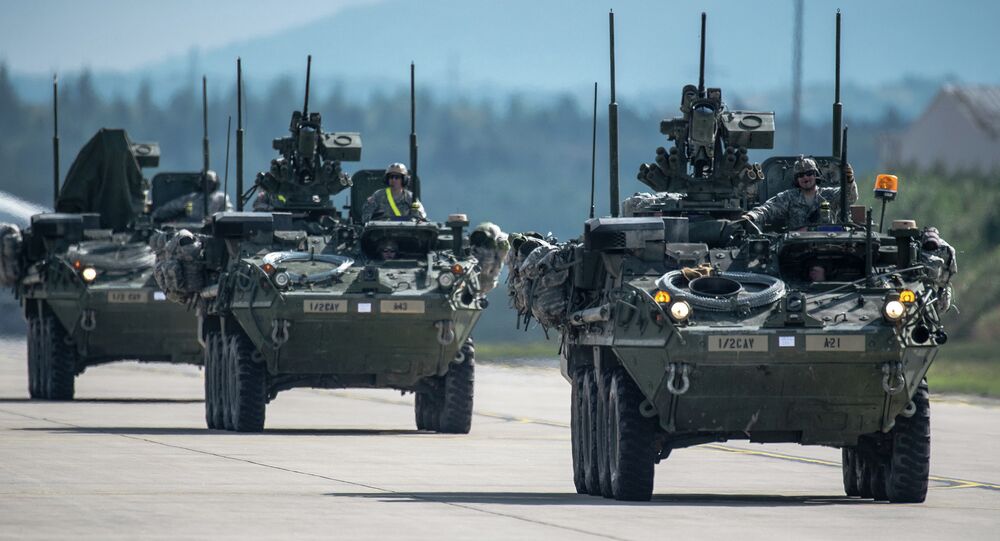 A US military convoy has entered the territory of the Czech Republic to participate in the Saber Strike-2016 exercises in the Baltic states. "One day we will wake up and see that US troops are here to stay forever," Czech Senator Jaroslav Doubrava commented in an interview with Radio Sputnik.

© AFP 2021 / MICHAL CIZEK
US Military Convoy Enters Czech Republic for Saber Strike Drills
“These convoys are provoking the Czech people who have traditionally been wary of having foreign troops in country. This is also a provocation against Russia and I’m afraid that all these US military convoys and military shows are simply meant to lull our vigilance, make us used to this,” Czech Senator Jaroslav Doubrava commented in an interview with Radio Sputnik Jaroslav Doubrava added.

The Czech Republic, together with its V-4 partners (the Visegrad Group of countries, comprising the Czech Republic, Hungary, Poland and Slovakia, supporting the initiative to strengthen NATO's capabilities on the alliance's eastern flank), is ready to set up a company for permanent deployment in the Baltic states.

The proposal will discussed during the upcoming NATO summit in Warsaw.

A few days ago Prime Minister Bohuslav Sobotka assured his Lithuanian colleague that the Czech Republic was ready to cover the Baltic states’ airspace amid the imagined threat by Russia.

When asked about Czech media speculating about Russia’s ability to occupy Lithuania, Latvia and Estonia in a matter of just three days, Jaroslav Doubrava dismissed it as “sheer paranoia.”

“I can assure you that the majority of our society does not view Russia as an aggressor and feels no threat allegedly being posed by it to either the Czech Republic or Europe in general.”

“Just look at the map with all these US military bases scattered around the world and compare this with the number of Russian bases and you will see whence the real threat to peace.”

He mentioned NATO’s consistent military buildup in Eastern Europe and the war games the alliance has been holding close to the Russian borders.

“I see no justification for NATO’s current buildup in eastern Europe, which increased the possibility of a military conflict. I can’t imagine a Czech or Slovak soldier fighting a Russian soldier. Even though our army now mainly consists of contract soldiers, mercenaries ready to fight anyone, our people will never forget the Red Army, which liberated our country from Nazi invaders during WW2,” Jaroslav Sobotka emphasized.

Meanwhile, the World Without Wars and Violence movement has sent an open letter to the participants of the US military convoy passing across the Czech Republic.

“In this letter we say that our children were born in peacetime and that we want to live in peace. We're asking the US soldiers to urge their government to stop using American troops in Europe and militarizing the minds of our children who are happily climbing onto these armored vehicles and enjoy the sight of all these  assault rifles they think are just a toy,” Dana Feminová, the leader of Centrum Narovinu public organization, said.

“We are dealing with a military-industrial lobby hell-bent on landing ever more contracts. We are calling on the US soldiers to stay away from these dangerous games, which are fraught with an armed conflict in Europe.”

"We are protesting against this convoy, but we are holding no grudge against these soldiers and would be glad to see them coming here as tourists. But now we want them to understand our fears,” Dana Feminová said.