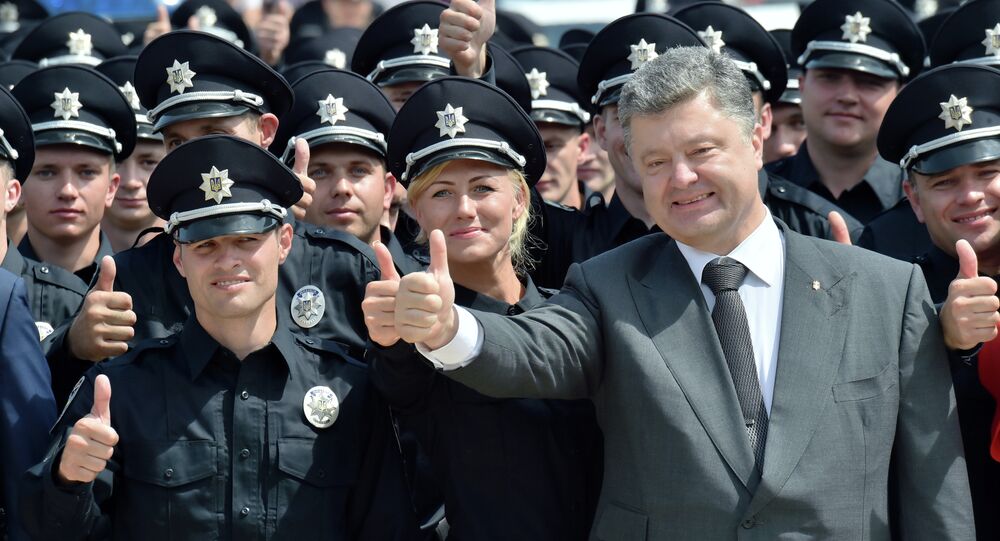 The Fruits of Kiev's Police Reform: Crime Up Nearly 50%

Crime is out of control in Ukraine. The police reforms conducted with so much pomp and ceremony last year have failed to bear fruit. Their only results, Russian online newspaper Svobodnaya Pressa suggested, "has been numerous photos of beautiful young patrolmen and women in new American-style uniforms and sunglasses. Statistics, alas, show that the new cops aren't able to cope with the criminals."

Last month, Ukrainian National Police chief Khatia Dekanoidze admitted that the crime rate in Kiev had jumped by 45% between 2015 and 2016, and proposed a "comprehensive approach" toward combating the threat.

Meanwhile, "Eka Zguladze, her predecessor and the ideological inspiration for the reform of Ukraine's police service, did not admit anything, but resigned from her post as deputy head of the Interior Ministry in late April and left for France," the newspaper added.

"The full official statistics are even worse," the paper pointed out. Measured against 2013, total crime per hundred thousand has grown by 20% in the last three years. Kidnappings jumped up by a shocking 264%, car thefts by 100%, homicide 67%, and robberies 46%.

© AFP 2021 / SERGEI SUPINSKY
Ukraine Police Reform: All Fluff, No Substance
"And this despite the fact that, according to some experts, the Interior Ministry has taken liberties with statistics to make them look less abysmal. Maxim Goldarb, the head of 'Pubic Audit' NGO, said recently that levels of violent crime have actually increased by over 30%, but the classification system has made it possible to artificially reduce this figure, for example by reclassifying 'murder' as 'grievous bodily harm causing death.'"

At the same time, the newspaper noted, "authorities are in no hurry to recognize the failure of the reforms and to bring the cops laid off as a result of lustration back onto the force. This amounts to at least 25,000 employees of the Interior Ministry…However, instead of drawing at least some of the old cadres back to the force, State Employment Service head Serhiy Kravchenko suggested that the dismissed security officers join the army."

And while ex-police officers are being told to go to front in eastern Ukraine, the number of persons held in Ukraine's prisons has fallen by half (from 140,000 to about 70,000), despite the growth in the crime rate. This has to due with loosened amnesty rules, a new criminal code, and 'Savchenko's law', under which one day in a pre-trial detention center counts as two in jail.

"And this," Svobodnaya Pressa suggests, "means that there are more criminals at large than there are policemen. As a result, unsurprisingly, the national average for resolved crimes is only 25% (18% for murder). In Kiev the statistics are even worse, with suspects found in only 17% of cases (and less than 15% for murder)."

© AP Photo / Efrem Lukatsky
Ukrainian Economy: From European Mega Power to Third World Backwater
Speaking to the newspaper, Ukrainian political scientist Alexander Dudchak said that the situation is only likely to get worse in the future.

"In truth," Dudchak said, "the main reason for the growth in the crime rate is not so much the unqualified personnel as the decline in living standards in general. Moreover, fighters returning from the front have smelled the smell of blood and felt their own impunity. They understand that they can get away with many crimes as 'heroes of the anti-terrorist operation'"

"And that's not the only factor contributing to the development of the current crime situation," the political scientist suggested. "We know that about 20,000 criminals were sent to the front in the Donbass on conditional amnesty. As a result, the Ukrainian army and volunteer battalions were saturated with criminal habits. All this manifests itself today in Kiev and other Ukrainian cities."

Dudchak emphasized that unfortunately, in the present circumstances, "reducing crime will be extremely difficult, especially given the continued decline in living standards, and the fact that Ukrainian society is being pumped up with arms. Today it's easy to buy an automatic rifle, a grenade launcher, and pretty much anything else your heart desires. Therefore, the growth in the crime rate will continue."

A Letter From Ukrainian Prison