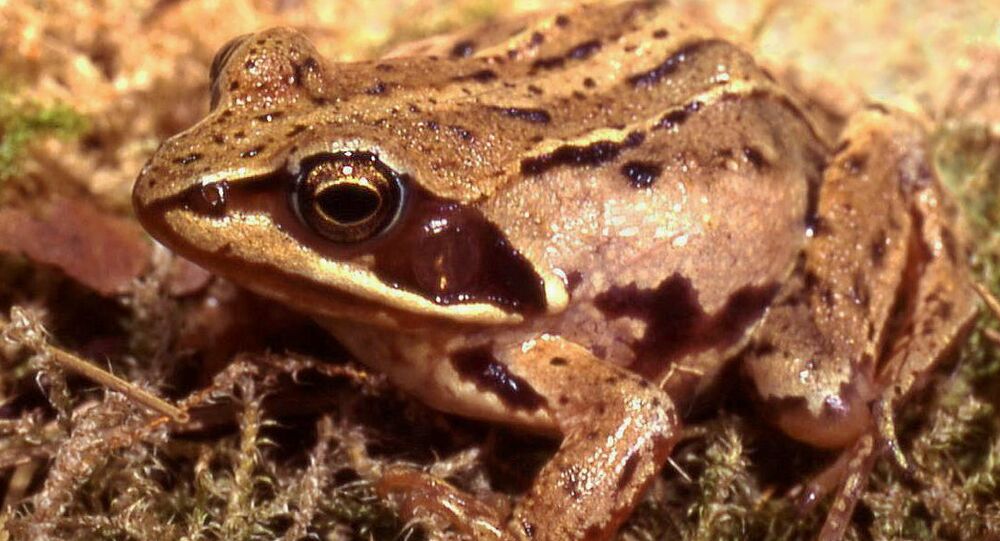 Contractors had to temporarily stop the construction of the nuclear power plant Hanhikivi-1 in Pyhäjoki, which is being built under a Rosatom project, in order to wait for the local population of moor frogs to awaken from hibernation.

© Wikipedia / Antti Lankinen
Finnish Government Closes Mine, Buries Hope for Energy Independence
The construction site of the future Russian-built nuclear power plant happens to overlap with the local habitat of the moor frog. Under the terms of the environmental impact assessment of the construction project, the frogs had to be moved to a safer spot as the indigenous population.

According to Roman Polin, a spokesman for the international company Suomen Maastorakentajat Oy, work on the removal of the topsoil began last autumn, but the frogs went into hibernation with the onset of cold weather in October, news outlet Fontanka reported. By order of the Finnish nuclear power company Fennovoima, all work had to be suspended. In May 2016, the sleeping beauties awoke and were honorably moved to a safe location. According to the schedule, the removal of topsoil will be resumed and completed before the end of July 2016, whereupon excavation of soil to the depth of minus 17 meters will begin.

​The moor frog (rana arvalis) is a slim, reddish-brown, semi-aquatic amphibian up to seven centimeters in length, which is native to Europe and Asia. The types of landscape they can inhabit are greatly varied. The moor frogs live everywhere from the tundra to the steppes, but prefer areas untouched by humans, such as damp meadows and bogs, but still may be able to live in agricultural and urban areas.

© REUTERS / Markku Ruottinen/Lehtikuva
In the Cold: Unsuccessful Nokia Purchase a Death Blow for Microsoft
​On May 24-25, a joint seminar on environment security was held by Rosatom and the Finnish Association for Atomic Energy (FinNuclear) in the Finnish city of Oulu. According to Finland's Minister of Employment Herkko Plit, the construction of the nuclear power plant Hanhikivi- 1 would not only secure the development of Finland's northern regions, but also contribute to economic growth in Finland as a whole by providing it with affordable and clean energy for decades to come.

"At present, industry consumes 46 percent of Finland's total energy production. It is therefore clear that renewable energy alone is insufficient to cover the demand. Considering the goal of reducing dependence on the products of the oil and gas industry as well as cutting carbon dioxide emissions, we pay great attention to the development of nuclear energy and the Hanhikivi-1 power plant in particular," Plit said.

The Hanhikivi NPP is scheduled for construction on the Finnish Hanhikivi peninsula, in the municipality of Pyhäjoki. It is to house one Russian-designed VVER-1200 PWR reactor, with a capacity of 1,200 MW. The plant is planned to supply 10 percent of Finland's energy demand by 2024.