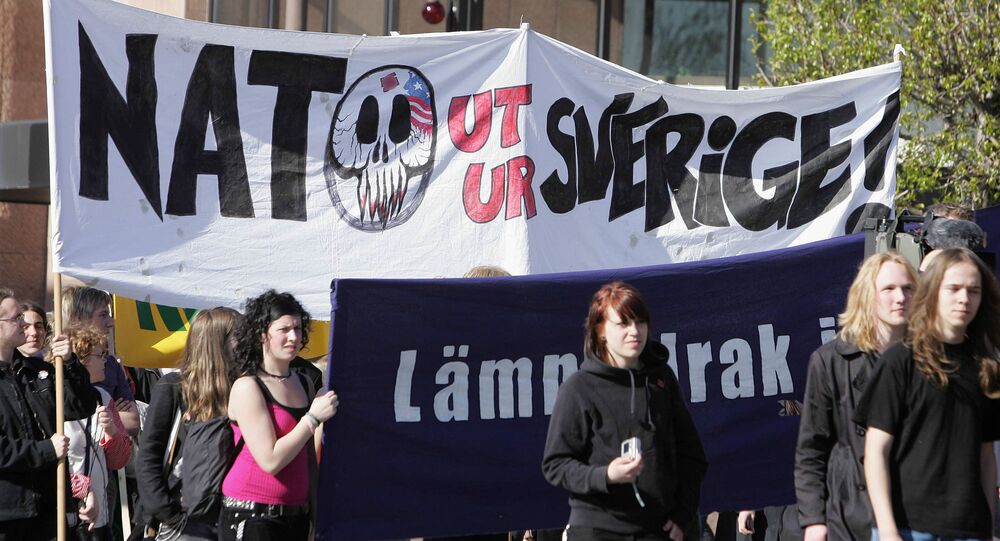 After Sweden Democrats reneged on earlier pledges to make a last-ditch effort to stall the decision, the Swedish parliament effortlessly railroaded through an agreement which essentially allows NATO to deploy forces in Sweden and brings the non-aligned Nordic country yet another step closer to the alliance.

© Flickr / Peter Fristedt
Opposites Attract: Swedish Left and Right Unite to Sink NATO Deal
The Swedish parliament ratified the so-called Host Nation Support Agreement (HNSA) after a proposal by the Left Party to put off the decision by one year, initially backed by Sweden Democrats, was voted down by 291 votes to 21.

The right-wing populist Sweden Democrats made an about-face ahead of the vote, abandoning plans team up with the Left Party, which argued that the hotly-debated deal posed a significant risk to the rights and freedoms stipulated in Sweden's constitution.

Despite earlier pledges by party leader Jimmie Åkesson to join efforts with the Left to stop the agreement he claimed posed "a threat to Sweden's neutrality," the Sweden Democrats had second thoughts in the eleventh hour and voted unanimously in favor of the controversial deal with NATO.

Remarkably, the party has been against closer NATO ties from the very beginning and officially stays true to its ideals.

Bizarrely, several Sweden Democrats party members claimed on Twitter and Facebook that they actually voted against the agreement, and that the parliament had published erroneous information on its website, news outlet Fria Tider reported.

"I am not at all surprised. The Sweden Democrats have been very wobbly on issues to do with freedom from alliances for some time now," he said as quoted by the tabloid newspaper Aftonbladet.

© AFP 2021 / JOHAN NILSSON / TT News Agency
The Blame Game: Sweden Never Tires of Crying Wolf and Accusing Russia
Originally signed in September 2014, the HNSA allows the alliance to deploy helicopters, aircraft, ships and personnel across Swedish territory, but only at Sweden's request. Since the agreement involved changes to Swedish regulation regarding privileges and immunities afforded NATO staff, a parliamentary ratification was necessary.

Additionally, public opinion in traditionally neutral Sweden, which boasts several centuries of non-alignment, has markedly shifted towards NATO in recent years. A survey by pollster Sifo, released in September 2015, marked the first time the majority of Swedes actually were in favor of NATO.

The HNSA may be seen as a major victory for Defense Minister Peter Hultqvist, who, despite formally denouncing perspectives of joining NATO, prepared a long series of agreements that would steadily increase Sweden's involvement with the alliance.

© Sputnik / Alexei Filippov
So Much for Neutrality: Sweden Goes All Out Against ‘Russian Propaganda’
Yesterday, the Swedish government entrusted the Swedish Civil Contingencies Agency MSB with negotiating a cooperation agreement with NATO's Center for Strategic Communications in Riga, Latvia, in order to address the "information war" on Russia's part, Swedish television network SVT reported. Hultqvist repeatedly urged Sweden to join the NATO Strategic Communications Centre of Excellence (STRATCOM), which is charged with targeting propaganda in traditional and social media.

Despite the soothing rhetoric that such measures "would not affect non-alignment," today Sweden has emerged as a full-fledged NATO member in all but name.

Sweden's deliberate creeping towards NATO may set an example for its fellow neutral neighbor Finland, which has also come under immense pressure recently with respect to NATO membership.

In late April, the Finnish Foreign Ministry published an "independent" report exploring the consequences of NATO membership for Helsinki. The report's primary conclusion was that the Nordic duo should stay together: either in both joining the alliance or declining the generous offer.