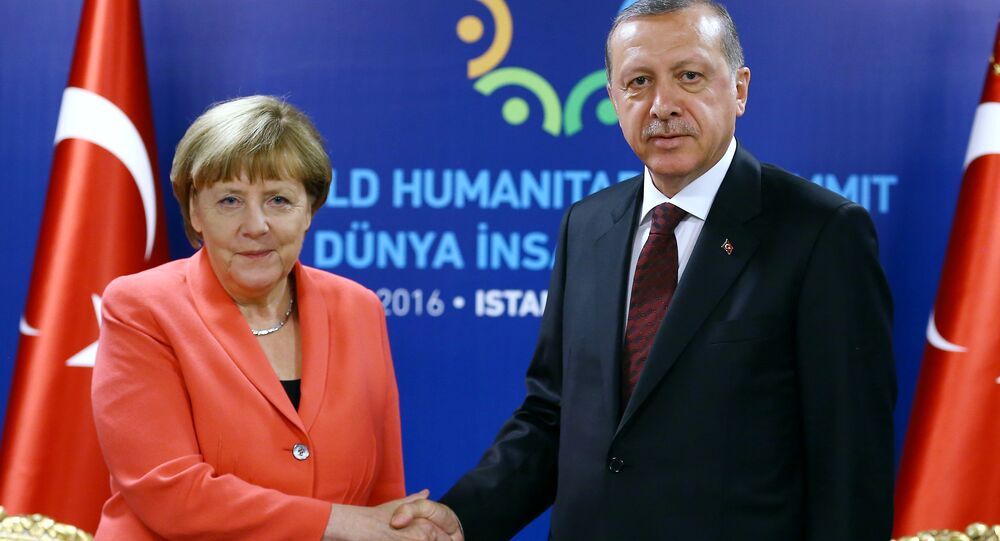 'Don't Cave in to Turkey': Germans Want Merkel to Stand Her Ground

© REUTERS / Ozan Kose/Pool
Critics Slam EU-Turkey Deal Under Spotlight at Humanitarian Summit
The German people have spoken and they are demanding that their leader, Chancellor Angela Merkel should stand up to The Turkish President Recep Tayyip Erdogan and not to cave in to his demands, even if it impacts the EU-Turkey refugee deal.

The poll was published by Stern-RTL and showed that most Germans want Merkel to take a strong stand against Turkey, especially in light of the country's human rights violations and freedom of speech issues.

Erdogan has demanded that unless Turkish citizens have visa-free travel, he has threatened to suspend the EU migrant deal that was signed by Turkey.

"If that is not what will happen… no decision and no law in the framework of the readmission agreement will come out of the parliament of the Turkish Republic," Erdogan said at the World Humanitarian Summit in Istanbul.

The arrangement between Brussels and Turkey states that any refugee who lands on the Greek islands must be sent back to Turkey.

The deal also stipulates that with every Syrian refugee that is being returned to Turkey from the Greek Islands, another Syrian will be resettled into the EU. Turkey will also need to prevent new sea or land routes for irregular migration opening from Turkey to the EU. Once these irregular routes have reduced or ended, a Voluntary Humanitarian Admission Scheme will be activated. This will be a system of solidarity between the EU and Turkey to provide protection for any persons displaced by the conflict in Syria to Turkey.

Our opinion of the EU Turkey deal. We don't like it one bit. https://t.co/fU9jzMpH8G

The EU has pledged to support Turkey by funding them with US$6.8 billion over the next four years, to assist with the refugee crisis.

© Photo : Pixabay
Merkel Misery Continues as Support Drains Away to Populist AfD Party
These recent statistics come in the wake of the last poll which revealed that most Germans did not think the EU-Turkey deal was beneficial. The survey was published in ARD-Deutschlandtrend, and showed that 56 percent of Germans think the agreement was bad, compared to 39 percent who thought it was good.

The latest numbers show how disconnected the German people feel with the deal between the EU and Turkey, but they also show how dissatisfied they are becoming with their Chancellor.