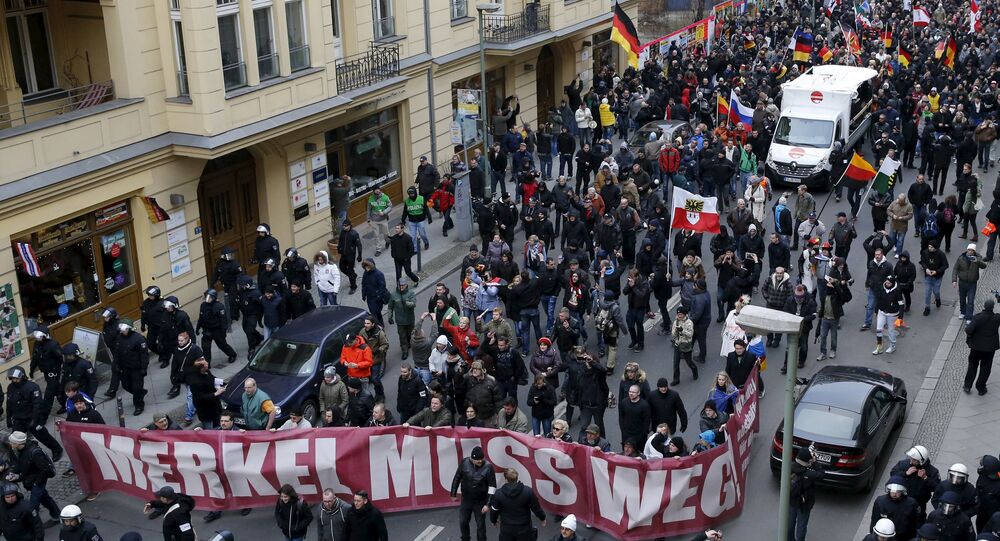 According to Germany’s Interior Minister, far-right hate crimes have dramatically increased concurrent with the ongoing migrant crisis, and no end is in sight.

According to numbers presented on May 23 by German Interior Minister Thomas de Maiziere, almost 1,000 "far-right" (i.e. driven by racial, national or religious hate) crimes were registered in Germany in 2015, five times that of the previous year.

© CC0
Daesh in EU: Armed, Dangerous and Operating Without Detection

Records show that 923 crimes against migrants were reported in Germany in 2015, against 175 in 2014. These include 3 attempted murders among 177 acts of violence, plus hundreds of non-violent hate acts, such as graffiti, and the use of Nazi and other racist incitements to hatred.

"The refugee topic was of course the focus of politically motivated crime", said de Maiziere at a press conference in Berlin.

Despite that the number of migrants arriving in Germany in the first three months of 2016 dropped, from 120,000 to 20,608, crime statistics show no sign of decline. In 2016, to date, 368 far-right offences have been registered, including 73 acts of violence. Notably, the statistics include attacks not only on migrants, but also on aid workers, elected representatives, journalists and politicians; everyone and anyone involved in migrant accommodation.

Investigators in Germany warn that there might be a well-funded far-right organization behind the attacks. Although no nation-wide activist network has been detected, a report by German Criminal Police Office's (BKA) notes "a high crime density in each region, the number of classified instigator and relevant persons, the availability of weapons or explosives and ever-increasing verbal radical rhetoric."

Far-left offences have increased as well, with some 9,600 offences said to have been reported in 2015, of which 2,246 were identified as acts of violence, primarily against far-right opponents or police.

Number of Offenses by Foreigners in Germany Hikes Amid Migrant Crisis