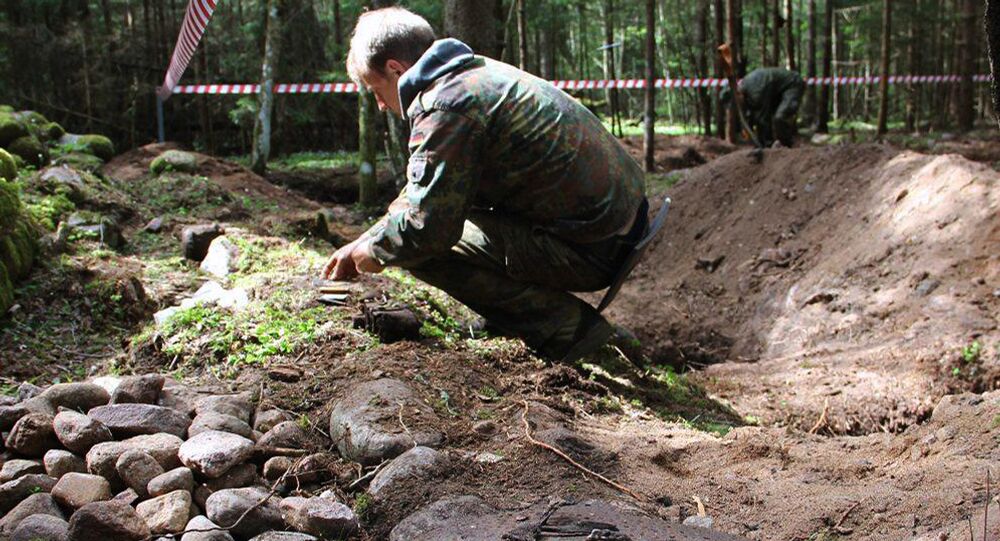 The international Russian-German expedition found the remains of 30 people on Russia's Bolshoi Tyuters island in the Gulf of Finland, according to Dmitry Volkov, representative German War Graves Commission (VDK).

© AFP 2020 / JUSTIN TALLIS
London Honors Memory of Soviet Soldiers Killed in World War II
The international Russian-German expedition started its work on Thursday and aims to find the remains of fallen German and Soviet World War II soldiers on several islands in the Gulf of Finland in order to rebury them on the mainland. Over 120 remains of German soldiers are believed to be currently on the islands, according to the VDK.

"As of today, 30 people have been exhumed. The total number of those buried in the German graveyard is unknown. They are mostly from the Kriegsmarine [navy] and we did this work in 5 days," Volkov said.

© Sputnik / Alexei Danichev
WWII Battlefields: Gulf of Finland Expedition Kicks Off Search for Fallen Soldiers
The chances of finding any remains of German World War II soldiers on the Russian island of Gogland in the Gulf of Finland during the current expedition are very low, according to Volkov.

"We are going to Gogland from Bolshoi Tyuters today. We have no exact data on the location of the remains of the German soldiers but we will search for them. The chances of finding them during this first visit are very low," Volkov said.