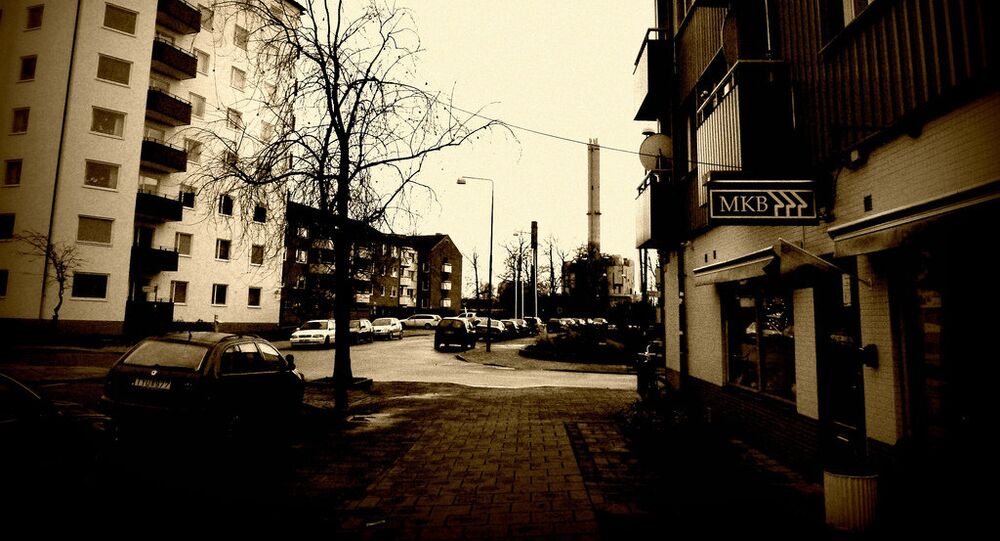 The all-European migrant crisis has left Sweden, renowned for its particularly lenient immigration policy, riddled with numerous "no-go zones," which, have been growing since the 1990s. To say that Swedes are not welcome in these predominantly non-white "alienation zones" would be an understatement.

© Flickr / Ninα
All Crime, No Punishment: Welfare-Friendly Sweden Gripped by Urban Ghetto Violence
While American ghettos have become progressively safer since the early 1990's and in some cases witnessed gentrification, many of Sweden's blighted areas are not even safe to visit. As early as last year, Swedish police released a report identifying 55 areas that were particularly affected by organized crime. The majority of these "exclusion areas" lie on the outskirts of metropolitan areas. One of the particularly nefarious ones is Seved, situated only steps away from Malmö's bustling city center. Malmö is often touted as Sweden's most multicultural city: over half of the population has a foreign background, according to various estimates. In 2011, people from 174 countries were represented in Malmö, where 150 languages are spoken.

However, the city's district of Seved has recurrently made headlines and has become synonymous with gangland crime and violence. In 2014, the postal company PostNord stopped delivering large packages to five streets in Seved, because of threats and violence, newspaper Skånska Dagbladet reported. In 2015, the municipality failed to conduct property renovations in full as planned, as security companies received death threats from gangs running drugs in the area, according to Skånska Dagbladet.

© AP Photo / David Keyton
Nordic Love of Aquavit Framed for Migrants' Sexual Molestation of Minors
Property owner Fredrik Malmberg claims that numerous tenants were forced to terminate their contracts because of harassment and threats. Malmberg admits to having received death threats for ousting unauthorized people from his premises.

"As long as you let them call the shots, they let you be. Otherwise, they become violent, no matter what background you're from. However, they are much tougher on the original Swedes. They do not want any Swedes in the area. They want a ghetto, where they are kings. I do not believe that the authorities even dare to talk about it," Malmberg told the tabloid newspaper Expressen.

Sepi V
Still Swedish Waters Run Deep: Swedish Financing of Terrorism Increases
Verbal abuse is the least a person with a Nordic appearance can get in this area. The word "Swede" itself has become a slur.

"What I noticed first, was that they never attack people from the Middle East. On the contrary, they were meanest against ethnic Swedes," an ethnic Serbian who has since moved away from Malmö told Expressen.

Today, there are several areas in Sweden that resemble Seved. All of them are socially vulnerable districts where gang crime and drug use flourish, and where locals harbor contempt for society, public utilities and the authorities, be it police, paramedics or firefighters, as long as they are Swedish.

© Sputnik / Valery Melnikov
Swedish Government Accepts Daesh Killings, Opposition Cries Blue Murder
It is little wonder that these environments also function as a hotbed of extremism, providing terrorist groups with "manpower," willing to fight the foundations of the Western society. Last year alone, over 300 Swedish-born extremists are estimated to have left the country to fight in conflict areas in the Middle East, making Sweden the second largest per capita exporter of terrorism in the European Union, topped by only Belgium.

Unsurprisingly, 23-year-old jihadist Osama Krayem, who was arrested on suspicion of being an accomplice to terrorist acts in Paris and Brussels, belonged to one of the Seved gangs. Earlier, he had strong links with armed thugs who harassed the neighborhood by smashing windows until the residents were forced to acquire bullet-proof glass, police spokesperson Sigrun Hilmarsdottir Sigurdsson confirmed.