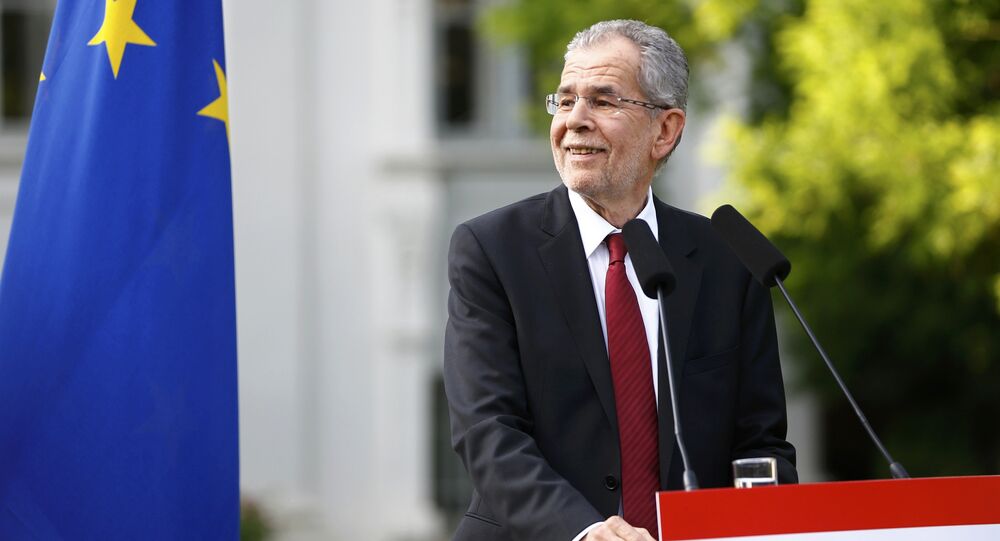 MOSCOW (Sputnik) — The victory of independent, former Green Party candidate Alexander Van der Bellen in the Austrian presidential elections will not have a significant impact on the country’s political life, as the role is largely ceremonial, a spokeswoman for the Austrian People's Party (OVP) told Sputnik.

© AP Photo / Ronald Zak
Independent Candidate Van Der Bellen Wins Austria President Elections – Interior Ministry
The statement contradict's the claims of Van der Bellen’s main rival in the vote, the right-wing Freedom Party’s Norbert Hofer, who threatened to make use of a right to dissolve parliament before the 2018 elections if he were to win.

"The Austrian foreign, international and migration policy is shaped by the national government, in other words by the coalition of OVP and SPO [Social Democratic Party]. The election of a new president therefore does not usually have any immediate impact on Austrian politics," Tamara Hausl said.

Moreover, the biggest challenge for the new Austrian president will be reuniting the country’s people after the heated election campaign, a spokeswoman for the Austrian People's Party (OVP) told Sputnik.

"All of us experienced an election campaign characterized by many issues that concern the Austrian president's duties only very little, or not at all. Now, the election has been held and we expect the new president to [pursue] the actual duties of his office. Hence, his biggest challenge will be to reunite the people in our country," Tamara Hausl said.

According to Hausl, the Austrian president's duties include performing representative functions abroad and keeping an eye on domestic politics.

"Due to the political system in Austria, it is not the president's duty to amend or make laws," she stressed.

© REUTERS / Heinz-Peter Bader
Possible Far-Right Hofer's Austrian Presidency to Become Victory for All Eurosceptics
Van der Bellen gained 50.3 percent of votes during the second round of presidential elections, while Hofer secured 49.7 percent of the votes.

Hofer was backed by the Eurosceptic far-right Freedom Party of Austria and campaigned on anti-immigrant and anti-EU platform. He sharply criticized the EU-Turkey deal aimed at tackling the flow of migrants and called for introducing further limits on the number of accepted migrants and stricter rules for asylum seekers.

Contrary to Hofer, Van der Bellen, who headed the Green Party from 1997 to 2008, supported the caps on migrants introduced by the "grand coalition" SPO/OVP government.