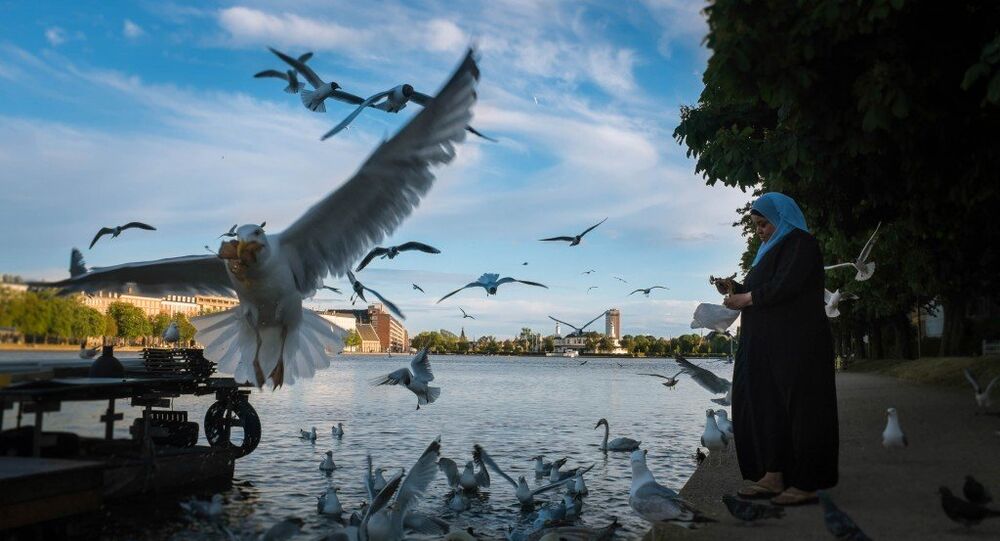 Last year's refugee crisis left vast swaths of Western Europe struggling with economic and societal problems arising out of the EU's ham-handed integration policy. Recently, the Danish People's Party argued that Islam was one of the largest social challenges for Denmark.

© AFP 2021 / THOMAS LEKFELDT / SCANPIX DENMARK
Blacklisted: Denmark Plans Controversial Crackdown Against Hate Preachers
Of late, Denmark has been pulling out all stops in order to solve the problem of home-grown extremism, while at the same time providing law-abiding Muslims with opportunities to integrate and merge into the Danish society. As the debate around plans to evict and blacklist "hate preachers" continues to seethe, the anti-immigrant and conservative Danish People's Party ventured to suggest that radical imams are only the tip of the iceberg and the real problem is the number of Muslims itself.

"The problem is that there are too many people with a Muslim background in Denmark. This is why we have these discussions, conflicts and parliament debates on religious freedom borders, which end up in frustration and only aggravate the tension," the party's integration and immigration spokesman Martin Henriksen argued in a TV debate.

© Flickr / lukestehr
Out! Copenhagen Evicts Notorious Islamist Organization
According to Henriksen, it would be beneficial for the country to limit the number of Muslims, Danish Radio reported.

"This will undoubtedly help. For this is why we have parallel societies and ghettos, and this is why we get to uncover all those things going on in mosques," Henriksen said, alluding to the TV2 documentary "Mosques Behind the Veil," which stirred a major uproar in Denmark.

In the documentary, two Danish Muslims visited mosques with a hidden camera, disclosing numerous cases of hate speech and instigation. Thus, a number of imams from the Grimhøj mosque, which last year made international headlines by declaring its support for Daesh, were caught on film encouraging their flock to stone unfaithful women to death.

© Flickr / Kevin Christopher Burke
Showdown in Copenhagen: Integration Minister Tells Young Thugs to Get a Job
According to Henriksen, the solution is simple.

"The answer is to limit immigration, which is the cause of the problems. And if someone came up here and was granted refugee status, you should be able to revoke their residence permit, so they can return home at some point. Refugees have to stay here temporarily," Martin Henriksen said, arguing that Islam already plays a large role in Denmark and has the potential to expand further.

"This [Islam] is, one of the greatest social problems we have in our country, if not the greatest. In the long run, I believe that Islam's values are incompatible with Danish values," Henriksen said.

© Flickr / Claus Tom Christensen
'Recipe for Integration'? Segregated Swimming Hours Big Hit in Denmark
At present, Islam is Denmark's largest minority religion. According to figures, reported by the BBC, Denmark has a Muslim population of about 270 thousand (4.8 percent out of a total population of 5.6 million).

By own admission, the Danish People's Party's goals are to protect the freedom and the cultural heritage of the Danish people, including the family, the Monarchy and the Evangelical Lutheran Church, as well as to enforce a strict rule of law, prevent Denmark from becoming a multicultural society and promote cultural assimilation of admitted immigrants.

In 2014, the anti-immigration party won European Parliament elections in Denmark by a wide margin, securing 27 percent of the vote.

Martin Henriksen is renowned for his hardline anti-Islamic stance, having at numerous occasions lashed out at Islam. He is also noted for admitting his goal in politics was to "fight Islam and this fanatical religion's influence on the Danish society." He also described Islam as a 'terrorist organization.'