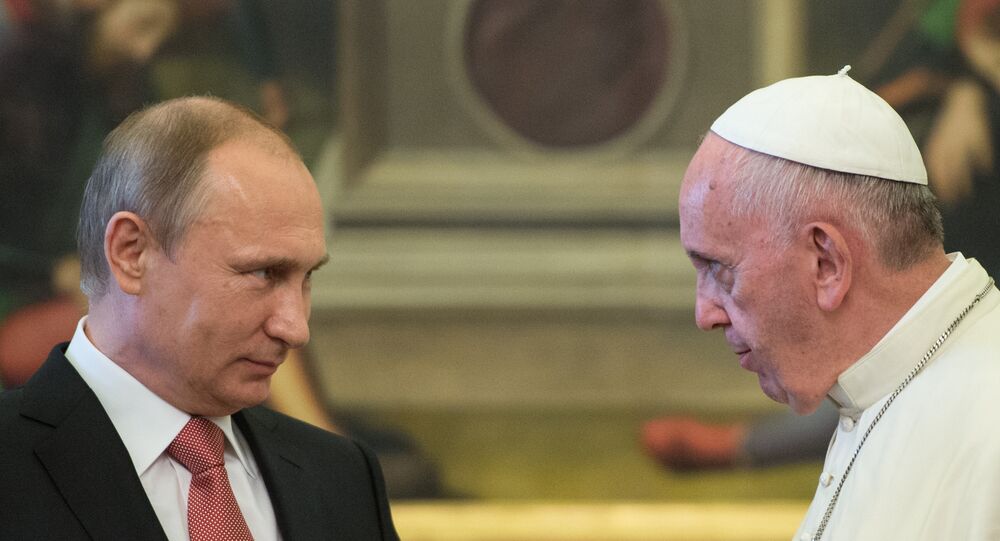 Russia and the Vatican: Why the Holy See Seeks Cooperation With Moscow

Moscow and the Holy See are working together on the issue of moral values and persecuted Christians. This cooperation is beneficial for both parties, from a diplomatic and political viewpoint, the French newspaper Le Figaro wrote.

According to Le Figaro, since the end of the Cold War, the Vatican has always been willing to hold a dialogue with Moscow.

"Russia has become one of the centers of a new polycentric world order, an empire in the process of establishment, which one should offer one's hand," political expert Canstance Colonna-Cesari said cited by the newspaper.

© AFP 2021 / ANDREAS SOLARO
Pope Francis Condemns Indifference Towards Migrants on Good Friday
After the dissolution of the Soviet Union, the relations between Moscow and the Vatican were characterized by significant tensions. However, over the past few years ties between Russia and the Holy See have strengthened, especially after Vladimir Putin's conversation with Pope Francis in November 2013, and the historical meeting of Pope Francis with Patriarch Kirill in Havana in February 2016.

On February 12, Patriarch Kirill of Moscow and All Russia met Pope Francis at an airport in Havana, Cuba, where they signed a joint declaration. It was the first time that Catholic and Russian Orthodox spiritual leaders held face-to-face talks since Christianity split into western and eastern branches in 1054.

Restoring ties with the Vatican, representatives of the Russian Orthodox Church speak about strategic alliance with the Catholic Church aimed at defending "traditional Christian values." In their joint declaration, the leaders of the two churches urged to protect the persecution of Christians in the Middle East and called on the international community to take action in this direction.

According to the expert, the Vatican is interested in rapprochement with Russia for several reasons. First of all, one needs to come to terms with Russia as it is a strong energy and military power, which at the same time is restoring its status as a world power, getting more and more oriented to the east and adheres to Orthodox values.

On the other hand, there is a diplomatic reason behind the Vatican's desire to cooperate with Moscow: a possibility to enhance its involvement in Syria thanks to Vladimir Putin's good relationship with Damascus as well as Russia's ability to veto any decision of the UN Security Council with regard to the Syrian crisis.

© AFP 2021 / FILIPPO MONTEFORTE
Pope Francis Arrives in Cuba for Meeting With Russian Patriarch Kirill
According to the newspaper, the alliance also has its political relevance for Moscow, especially taking into account the close connection between the Kremlin and the Russian Orthodox Church, the newspaper wrote.

"Relations with the Holy See are intertwined with the main goal of Putin's foreign policy: to return the status of a super power," the newspaper wrote.

"The situation in the Middle East gives Putin an opportunity to emphasize Russia's role in the international arena and present himself as a defender of eastern Christians in the spirit of Catherine the Great," it continued, citing political expert Yves Hamant.