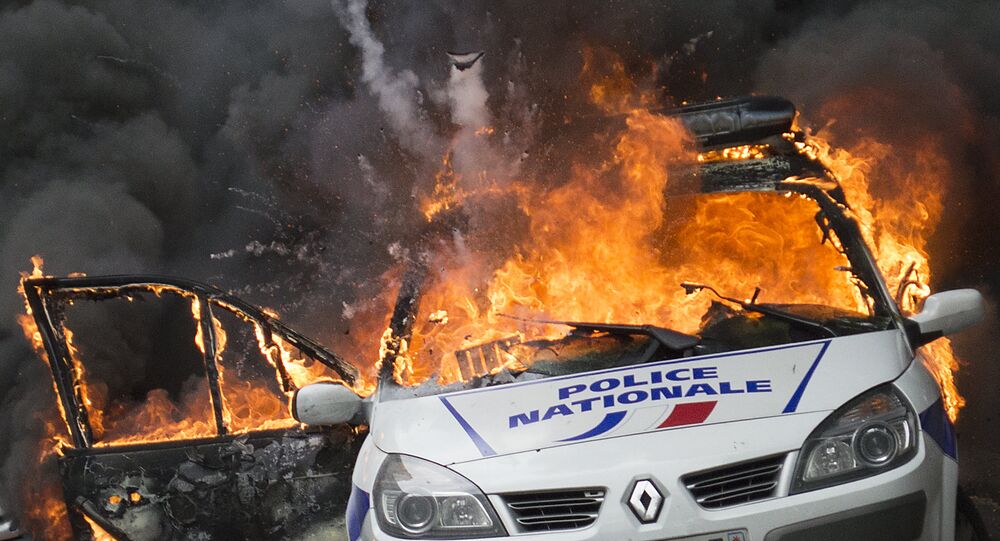 On Tuesday, French transportation workers took to the streets in a wave of weeklong strikes and protests in opposition to new Brussels-backed 'labor reforms' forced through by executive decree last week, without parliamentary approval.

The EU reforms look to abolish the country’s national working time agreement, that imposes limits on the number of hours an individual can be asked to work before receiving overtime pay, and is considered particularly disadvantageous to the transportation industry as it reduces the amount of rest time that truckers have available between hauls.

French Prime Minister Manuel Valls successfully circumvented a vote by members of Parliament, who intended to side with public opinion in opposition to the measure, under authority granted by Article 49(3) of the European Union Constitution that overrides national processes.

The measure was supported by the French President Francois Hollande, who has called on the protesters to stand down. "I will not give way because too many governments have backed down," said Hollande in an interview with Europe 1 radio. "I prefer that people have an image of a president who made reforms rather than a president who did nothing."

The protests have at times dissolved into rioting, with police cars burnt, roads blocked with burning tires, and widespread property destruction. Some 220,000 protesters are estimated to have joined the French protests.

On Thursday, Loud & Clear’s Brian Becker sat down with Alex Gordon, former president of the British transportation union, to discuss the ongoing fight by French transit workers against the measures.

Tell us about the protests against the reform measures in France

"It is developing very fast, we were talking just last week to French trade unionists in London who were telling us that this was going to kick off big time and man, it has," declared Gordon. "Yesterday morning at 5am French workers in the road transport sector went on strike, but they also began putting up burning barricades, tires and other materials, outside fuel depots across France to shut down the road freight system."

"Meanwhile, the rail unions have also started an all-out strike, which is crippling the French railways," stated Gordon. "This is important, if you remember back to 1995, when the French labor movement rose up en masse against the proposed Juppé' reforms, which were an attempt to do away with the French welfare state, and that was led by French transport workers, particularly in the rail industry, so they have a kind of iconic role in the French labor movement."

"When rail workers kick it off it is a sign that things are not going well for the government," said Gordon.

Why is a Socialist government attacking workers’ rights in France?

"Let me quote to you from the bulletin put out on Monday by the committee of France’s largest union, the CGT: 'After showing contempt for many workers protesting against this draft law and contempt for the 74% of French voters who oppose these socially destructive proposals, the French government has exposed itself as the loyal servant of dictates from Brussels and of the wealthy by resorting to article 49(3),'" recited Gordon.

Gordon explained that the actions taken by the French government show that the socialist administration of President Hollande and Prime Minister Valls is socialist in name only, and does not serve the interests of the working class, but instead is merely acting on orders from bureaucrats on the European Commission.

"They feel that way because last November the European Commission sent very clear instructions to the French government telling them exactly how to implement these so-called labor market reforms," explained Gordon. "These measures attack the rest periods for transport workers and attack workplace rights, so French workers rightly see this socialist government as being a puppet of unelected bureaucrats in Brussels."

What is in the reform measures?

Gordon detailed that the new measures will cut earnings and worsen working conditions, particularly for those in the trucking industry. "The law will cut overtime rates, it will end the national legal working time agreements, and it will allow employers to enact changes to weekly driving hours and to limit rest periods between work commitments," said Gordon.

"Average working hours for truckers in France are already very, very high, despite this pervasive urban myth that the French have very short working hours," began Gordon. "In fact, working hours for short-haul truck drivers exceed 43 hours per week at the moment, and 48 hours for long haul drivers, so this is an attack on working conditions, rest periods, and earnings, which explains why these workers have responded so enthusiastically to this attack."