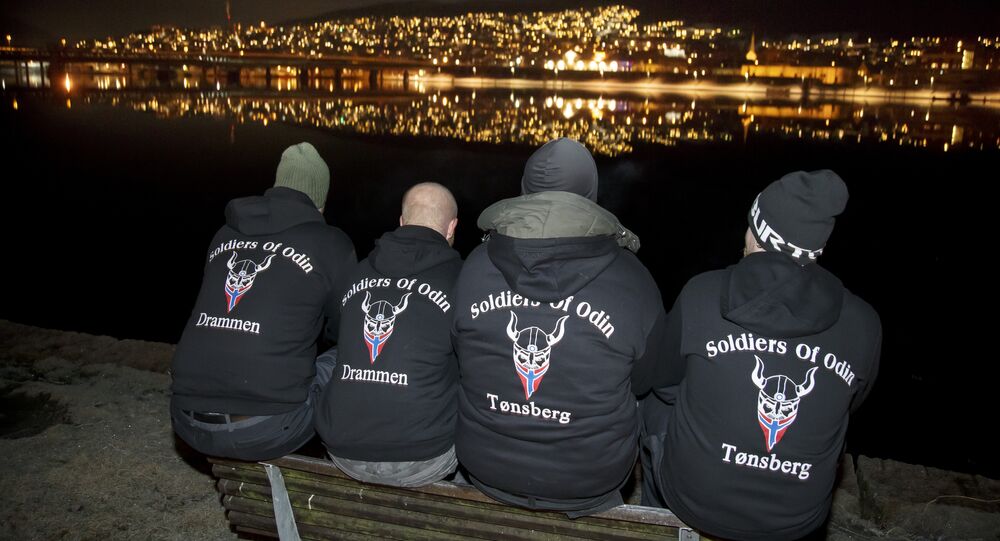 Soldiers of Odin, the name of the notorious anti-immigrant group behind street patrols claiming to protect Finnish residents from migrant crime, has become a registered trademark. Ironically, the application was filled by a former leftist politician who in an anti-racist protest plans to produce glittery unicorn-themed clothing.

© Photo : Youtube/420news
Coming to America: Soldiers of Odin 'Bring Together White Supremacists, Anti-Gov't Groups' in US
The trademark application was submitted to the Finnish Patent and Registration Office PRH by Riikka Yrttiaho, currently studying in Sweden. By her own admission, the former Left Alliance grassroots politician filed the trademark application to protest the Finnish authorities' decision to acknowledge Soldiers of Odin as a registered organization.

"Plans are underway to manufacture high quality local handicraft, and rest assured there will be no lack of unicorns and glitter," Yrttiaho ascertained.

"As long as a racist street patrol group is allowed to operate in Finland on a perfectly legal basis, there may also be room for harmless groups to register and organize," Yrttiaho declared, claiming she raised the money through crowd-funding.

© Photo : Youtube/420news
Cruising for a Bruising: Soldiers of Odin Sweden Get First Results
The far-right vigilante group Soldiers of Odin, named after an old Norse god, was formed last autumn by truck driver Mika Ranta in the northern Finnish town of Kemi as a negative reaction to the wave of criminal asylum seekers. By its own admission, the Soldiers' of Odin's stated goal is to protect people, especially women, from criminal immigrants, and also "to help everyone regardless of their ethnic background". Thus, the group fervently denies all media accusations of extremism, neo-Nazism or criminal connections.

As of May 2016, the group's number of Facebook likes in Finland alone exceeded 42,000. The Soldiers of Odin have since established cells in Sweden, Norway, Poland, Germany, Estonia, Hungary — and of late even overseas in Great Britain, the United States and Canada.