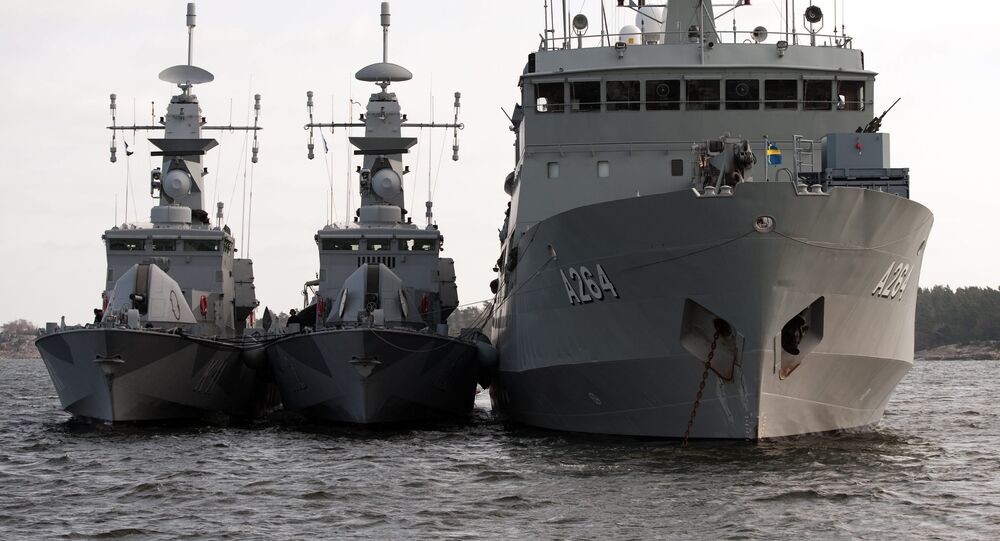 Yesterday, SWEFINEX 2016, a major Swedish-Finnish military exercise, commenced in the vicinity of the Swedish isle of Gotland, which is geared for comprehensive militarization in the wake of Sweden's recent wave of anti-Russian paranoia.

© AFP 2021 / JONATHAN NACKSTRAND
The Perennial NATO Issue: Peaceful Nordics Spoiling for a Fight
The annual exercise, which is being held between the two Nordic countries which haven't joined NATO's ranks, is focused on anti-submarine warfare, mine clearance and escorting merchant vessels in the waters around the island and the Stockholm archipelago.

Finland and Sweden take turns in hosting the event. This year, the Swedish Navy is playing host and has joined forces with Finland's navy in a ten-day long military exercise to practice cooperation and mutual aid. Next year, both countries plan to establish a joint Swedish-Finnish battlegroup to be deployed in the event of war.

An important goal of the exercise is to make sure that communication and procedures function well: the mixed personnel will consist of an equal number of Swedish and Finnish officers, Swedish news outlet Hela Gotland wrote.

© Flickr / Lauri
Nordics Dig Up the Hatchet, Engage in NATO War Games
During the exercise, the navies will practice escorting merchant ships, conducting anti-submarine warfare, clearing mines, monitoring vessel traffic and providing logistics support. A total of 600 Swedes and 250 Finns are to take part in the naval exercise, which will involve the use of helicopters, reconnaissance planes and interceptors. Today, some 15 Swedish and Finnish military vessels are expected to be stationed in the island of Gotland's Visby harbor, Swedish Military said.

Last year, Sweden decided to position troops on Gotland in the Baltic Sea, which lies halfway between mainland Sweden and Latvia, to strengthen the "weakest link" in the country's naval defense. Shortly thereafter, a local Gotland politician voiced plans to mine the island's harbors so that it could fend off an imaginary attack by Russians. In the same vein, Gotland's governor Cecilia Schelin-Seidegård stressed the island could potentially be used as a key place from which to fire upon invading Russian troops, if Russia were ever to decide to take over the Baltics.

In 2014, Swedish authorities imagined that a Russian submarine was lurking in the waters around Gotland Island. The ensuing media hysteria, which was based on grainy photographs reminiscent of 'evidence' of nearby Scotland's Loch Ness Monster, resulted in the Swedish government finally admitting that the panic had all been for nothing.