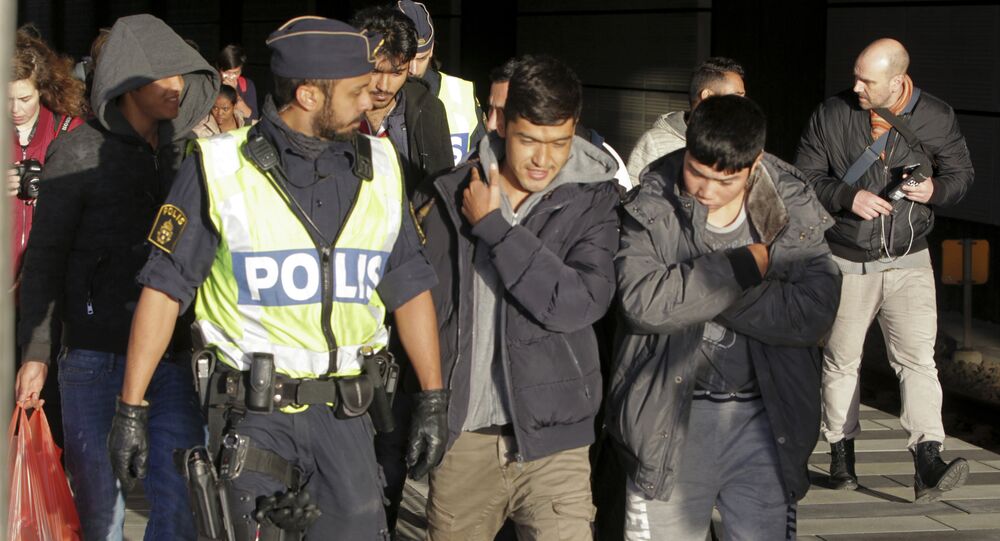 Sweden's proud capital city of Stockholm has seen an unprecedented series of smash-and-grab attacks over the last year amid the ongoing migrant crisis.

© Flickr / Heinrock
The Seamy Side of Welfare Society: Sweden Gripped by Gangland Violence
One of the reasons behind the dramatic increase is that it has become relatively easy for hoodlums to steal heavy machinery, such as wheel loaders.

"Theft protection on the big machines is beneath contempt. First, the personnel are loath to properly lock the machines. Second, many of the machines often have matching ignition keys. Therefore, it is enough to take hold of at least one set of keys to gain access to virtually all construction equipment in and around Stockholm. And today, it is the criminals have who the keys in their possession," Swedish Trade Federation's Security chief Per Geijer told Swedish Radio.

© AFP 2020 / JONATHAN NACKSTRAND
Sweden's Police Short on Staff, Funds Amid Refugee Chaos, Terrorist Threat
Swedish Trade Federation represents companies in both whole and retail trade. A significant number of companies which are members of the group, including a Louis Vuitton shop, have been subjected to smash-and-grab attacks. In every scenario, thieves use heavy industrial machinery such as wheel loaders or tractors to bulldoze the building's façade; the robbers then enter the building, grab the goods and make off in a fast getaway car.

According to police, this "business" is very lucrative. The penalties are low, and the risk of detection is relatively small.

"Unfortunately, the heavy construction machines are very easy to steal. More often than not, they sit in unmonitored and unfenced areas that are not protected by alarms in any way," he told Swedish Radio.

From 2017, all construction machines must be equipped with anti-theft hardware and immobilizers, according to trade organization Maskinleverantörerna, organization president Björn Bäckström told Swedish Radio. Immobilizers are found in many modern cars; one needs a key and a code to unlock the engine and the ignition, thus preventing "hot-wiring."

© Flickr / Tommie Hansen
Sweden's Snow Job: Migrants Spark Housing Problems, Spur Unemployment
In an unforeseen ethical twist, it is considered the done thing for official statistics in politically correct Sweden to conceal the ethnic background of violent criminals. As a result of the country's over-lenient immigration policy and dismal failure to properly integrate the migrants, Sweden has seen a surge of ethnic crime in its numerous 'no-go zones', blighted new ghetto areas in and around its cities.

At the same time, according to house rules among Swedish law enforcement organs as well as the mainstream Swedish media, stressing a person's ethnic origin or nationality should be avoided if "not pertinent" to the case, which most often leads to "imported" criminals being portrayed simply as "Swedes."