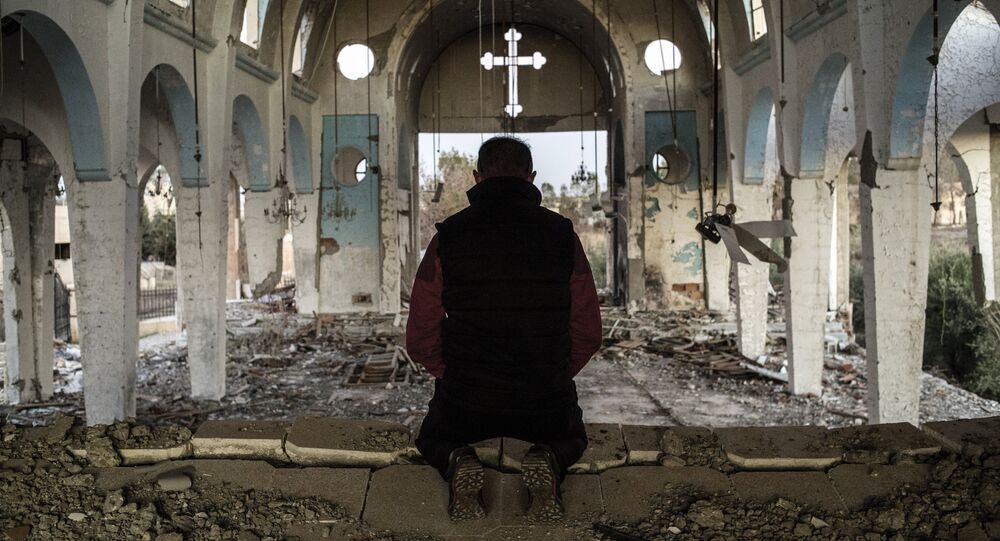 The Daesh terrorist organization, which is responsible for ethnic purges and the mass murder of Christians in the Middle East, is not guilty of genocide, according Sweden's ruling parties the Social Democrats and the Green Party.

© AFP 2020 / Ilyas AKENGIN
Seizure of Churches in Diyarbakir Summons Fears of New Armenian Genocide?
Last week, the Swedish parliament voted on whether Daesh's ongoing mass murder in Syria and Iraq should be classified as genocide. All parties except the two government parties the Social Democrats and the Greens concurred that Daesh's killings and persecution directed against Christian and Kurdish minorities constitutes genocide. However, when it came down to voting, only the Sweden Democrats, the Liberals and the Christian Democrats recognized the Daesh killings as genocide, wrote newspaper Fria Tider.

"Unfortunately, it looks like we will be sending a very bad signal from the Swedish Parliament by not recognizing this as genocide. I think this is disgraceful!" Julia Kronlid of the Sweden Democrats said.

"Daesh is a genocide machine," Kerstin Lundgren of the Center Party stated, according to newspaper Dagen.

© AFP 2020 / Johan Nilsson / TT NEWS AGENCY
Daesh Setting Their Sights on Sweden as Homegrown Terrorism Froths
Parliamentary spokesperson for the Moderate Party Karin Enström argued that is not a matter for the Swedish Parliament to decide upon.

Social Democrat MP Anders Österberg, however, felt that Daesh was ‘only' guilty of attempted genocide, agreeing that the situation in Syria and Iraq was a "humanitarian catastrophe."

"According to international law, it is very difficult to prove that there is actually a genocide going on," he argued. Österberg also cited the alleged brutality of the Assad regime "striking indiscriminately" at the Syrian civilians, as well as abuses committed by other parties.

Earlier, the Sweden Democrats presented a motion on establishing a "safe zone" for vulnerable minorities in Syria and Iraq, which was rejected.

Sweden's failure to recognize Daesh's atrocities as genocide have stirred a strong reaction among both the country's Christians and unbelievers.

President of the Swedish Humanist Association (Humanisterna) Christer Sturmark said it was an outrage the persecution of Christians in the Middle East was not recognized as genocide, whereas Stefan Gustavsson, Secretary General of the Swedish Evangelical Alliance, said this was betrayal of the victims.

Since the onslaught of Daesh in 2014, thousands of Christians and Yazidis were killed, whereas a large number of women were captured as sex slaves. Hundreds of thousands are still on the run because of their religion or ethnicity.

A few years after the millennium, the number of Christians in Iraq was estimated as 1.5 million. Today, observers speak of as few as 200,000, newspaper Dagen wrote last week.