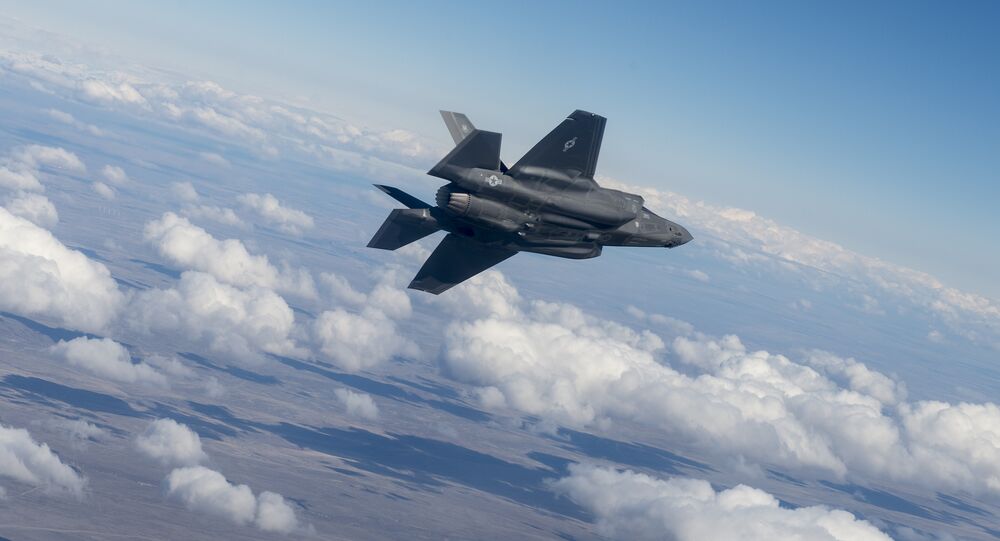 The protracted debate about Denmark's decade long process to replace the nation's fleet of fighter jets has finally come to an end as Prime Minister Lars Løkke Rasmussen announced Denmark has settled on the F-35A Lightning II.

© Flickr / US Air Force
Danish Blue: Danes Not Too Keen on Copenhagen's F-35 Deal
Lockheed Martin's F-35 was preferred to the other contenders, despite Boeing's obtrusive advertisement campaign of its Super Hornet, which many Danes dismissed as a nuisance. The Danish Government will recommend the purchase of 27 new F-35A Lightning II jets, also known as Joint Strike Fighters.

Defense Minister Peter Christensen earlier said the total lifetime costs of the new fleet would reach 56.4 billion kroner (8.7 billion dollars), whereas a recent Radio24syv report indicated the total cost of 28 fighter aircrafts over a 30-year lifespan, including equipment and maintenance, actually could run as high as a staggering 100 billion kroner (roughly 15 billion dollars).

© Flickr / Gonzalo Alonso
Winged Secrecy: Warplanes Undermining Danish Democracy
In the long run, Denmark proved unfazed by the F-35's blemished reputation. Earlier, spiraling costs and numerous schedule delays in the US production of the F-35 propelled the total cost of the aircraft almost twice the initial estimate, prompting notorious hawk Senator John McCain to call it "a scandal and a tragedy."

However, the government's pick of the F-35 was all but unexpected, combat aircraft expert and editor of trade magazine nytkampfly.dk Anderas Krog argued.

"F-35 has been the favorite for the last 10 years. Our close allies, the ones we usually go to war with, also use the aircraft. This means that we will join the large circle of users for the most part most of the aircraft's life," Andreas Krog said as quoted by Danish Radio.

"The F-35 is the obvious choice, whether Denmark should participate in international operations or enforce its own sovereignty against, for example, Russia," professor of political science Mikkel Vedby Rasmussen from the University of Copenhagen told the tabloid BT.

Despite the government's recommendations, a new political quarrel is likely to ensue around the size of the procurement. Party clashes are inevitable, as the Conservatives immediately said that there should be at least 30 jets while the left-wing Socialist People's Party countered that Denmark should only purchase 18 to 24, whereas the Red-Greens and the Alternative continue to argue against buying warplanes altogether.

© Sputnik / Andrey Stenin
Danish Parliament Approves Expansion of Military Mission Against Daesh
Unsurprisingly, their stance resounds with the general Danish public, which is predominantly against the flashy military splurge amid growing welfare apprehensions and social service cutbacks. A poll conducted on behalf of the political website Altinget showed that 59 percent of Danish voters disapprove of the mammoth purchase altogether, while only 25 percent think it is a good idea.

Denmark currently has a fleet of 30 F-16 fighter jets that have been in service since 1980. Since the F-35 will first be "fully operational" in 2027, there will be a gap of three years, when Denmark's air force will be unable carry out its international duties, as the current F-16s will soon become obsolete, Defense Minister Christiansen admitted to newspaper Fyens Stiftstidende.