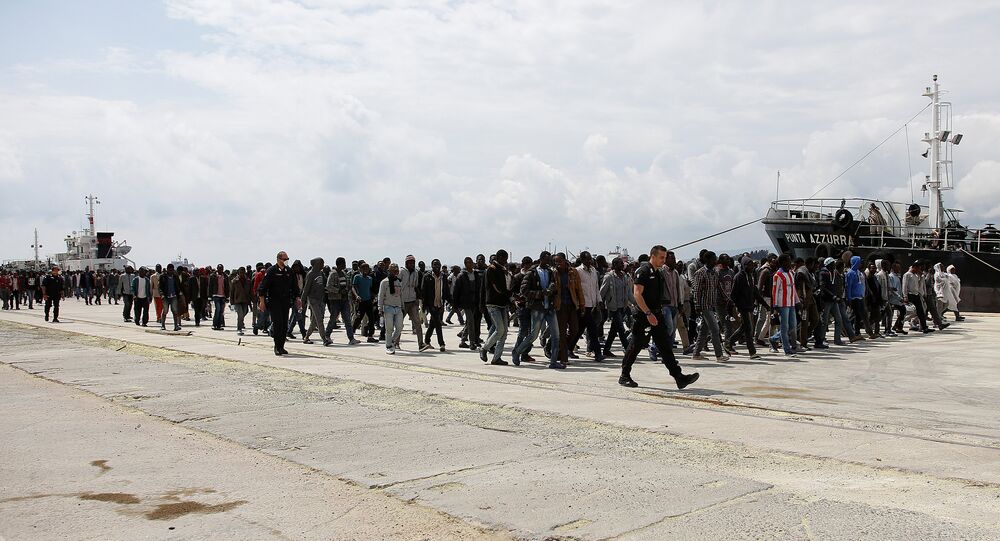 The breakdown of negotiations between Poland and Italy over the acceptance of 100 asylum seekers by Warsaw is a result of Polish cautiousness that should be heeded by the rest of Europe, Polish politician and commentator Miroslaw Orzechowski told Sputnik Poland.

© AP Photo / Alik Keplicz
Poland Against Forcible Refugee Relocations, Detention Camps – President’s Aide
The first group of 100 refugees who were supposed to be accepted by Poland has not arrived at their destination because Polish authorities have chosen to employ a cautious approach to migration that should serve as an example to other countries, Polish politician and commentator Miroslaw Orzechowski told Sputnik Poland.

The refugees that were supposed to move to Poland are originally from Syria, Iraq, Yemen and Eritrea; 65 of them are currently in reception centers in Greece and 35 are in Italy.

On Monday a spokesman for the Office of Foreigners told the Polish newspaper Rzechpospolita, reporting on the "fiasco," that the process of resettling the refugees in Italy was terminated largely because of the Italians' failure to comply with Poland's requests for information about the asylum seekers.

"The Italian side did not provide access to the applicants, so that these people could be relocated," said Jakub Dudziak, explaining that Poland's verification procedure requires, among other things, a direct interview with the applicant.

Orzechowski said that the delay is because of attention to detail on the part of the Polish authorities, who are exercising due care about who is allowed into the country.

"I think it's absolutely not a bad thing that somebody who wants to live in Poland has to be properly checked, because from the point of view of what's happening in Europe it's clear that refugees often bring a threat with them," he said.

"This is not a phobia on the part of the Polish, I would say it's rather foresight which will be an example to others in the future. We have our culture, our tradition and faith, and we want to preserve all that. We are afraid, and I think not without foundation, that our orderliness will be destroyed. But our reluctance is not based on chauvinism," he said.

© AP Photo / Alik Keplicz
Polish MP Knows How to Solve Migrant Crisis: Male Refugees ‘Should Be Armed and Sent to Fight for Their Countries’
Orzechowski thinks that this reluctance is not an example of xenophobia in Poland. Referring to some recent reported attacks on foreigners there, he sought to make clear that they are likewise not an example of a wider tendency.

"Some of these cases that occur here and there might be provoked. Of course, I'm not trying to justify it, any violation of another person's dignity and integrity is a crime. But I think it is very easy to create a provocation, or state on the basis of a made-up, unproven example that this is a manifestation of Polish chauvinism. There isn't any," Orzechowski said.

"The majority of Poles are Catholics. That doesn't mean that we are all saints, but we are filled with compassion, mercy towards others, but taking into account our own security."

"Each of these issues requires its own analysis. At the end of the day, we are not dealing with cases like in Germany – attacks on centers for foreigners. However, I don't want to say that Germans are bad and we are good. In Poland, we only have some periodic cases, which need to be investigated further."

Orzechowski said that to the recent large wave of migration has resulted in demands from the public and government for stringent requirements about the acceptance of asylum seekers.

"I want to stress once again that Poles' prudence should not be confused with a dislike of foreigners. At the end of the day, there are Muslims in Poland who have lived here for centuries, Orthodox, Protestants, and we live together fine."

"One the other hand, the phenomenon of total migration, this exodus from the Middle East and North Africa is something new and unknown for us."

© REUTERS / Kacper Pempel
Over 1,000 Poles Rally in Warsaw Against EU Refugee Plan
Orzechowski believes that the importance of religion in Polish society, and media reports of attacks in other parts of Europe, have contributed to a desire to limit migration.

"Observing this situation via the media, the attacks that have been carried out in Western Europe and Russia, Poles have become more sensitive to this issue," and are worried about similar attacks, Orzechowski said.

"I would put accusations of chauvinism to one side, and say that this is about taking precautions. There will soon be some religious events in Poland (World Youth Day 2016 in Krakow, organized by the Catholic Church), we are talking about millions of worshippers and their meetings and this issue must be seen in this context."

"I think that considering how to ensure the security of our families is a sign of common sense," he concluded.