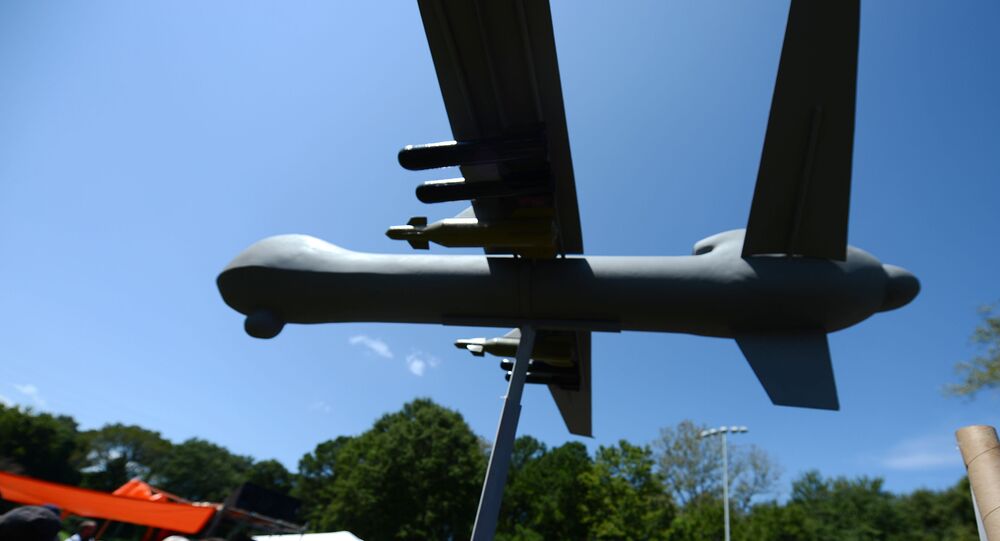 The UK government must urgently clarify the legal basis for its policy of carrying out drone strikes against terrorists, a committee of lawmakers have warned, amid fears uncertainty over Britain's actions may expose service personnel and ministers "to the risk of criminal prosecution for murder".

In a report released by the UK's Joint Committee on Human Rights (JCHR), lawmakers concluded that while the government insisted it didn't have a "targeted killing policy," London's actions made it clear that Britain was prepared to use lethal force overseas as part of counterterrorism operations.

What is the Government's policy on the use of drones for targeted killing? Read our report: https://t.co/yIMNIxHbxA pic.twitter.com/dXVwd2azk5

The committee assessed the death of British jihadi Reyaad Khan, who was killed by a UK drone strike in Syria in August last year.

© AP Photo / Lefteris Pitarakis
UK Government Accused of Adopting Secret 'Kill Policy' in Syria
Upon revealing the incident to parliament, British Prime Minister David Cameron described the strike as a "new departure," as it was "the first time in modern times" that such an attack had been carried out in "a country where we are not involved in a war".

The revelation sparked feverish debate in Britain and outrage among some in parliament, as lawmakers had not yet approved airstrikes to be carried out in Syria, leading to accusations that the government had breached parliamentary protocol.

While the JCHR accepted the drone strike against Khan was part of a wider armed conflict against Daesh in Iraq and Syria, and was therefore covered by the Law of War, chairperson Harriet Harman said the government had not been "crystal clear" about the legal basis for killing Khan.

Our Chair, @HarrietHarman, on the use of #drones for targeted killing. Read our report: https://t.co/yIMNIxHbxA pic.twitter.com/fNuVDnzkAC

The committee also raised doubts over the governments claims it doesn't have a policy of targeted killing, with ministers and other officials previously refusing to answer questions about whether the UK has its own 'kill list' of people set to be targeted.

"Although the Government says that it does not have a 'targeted killing' policy, it is clear that it does have a policy to use lethal force abroad outside armed conflict for counterterrorism purposes," the parliamentarians said.

The report has once again highlighted the delicate legal debate surrounding the issue of drone killings outside of warzones, with the committee noting that Defense Secretary Michael Fallon had demonstrated a "misunderstanding of the legal frameworks that apply".

This has led to worries that such confusion, demonstrated by senior officials such as the Defense Secretary, could leave British officials at risk of persecution.

"We were also concerned that the ongoing uncertainty about the Government's policy might leave front-line intelligence and service personnel in considerable doubt about whether what they are being asked to do is lawful, and may therefore expose them, and Ministers, to the risk of criminal prosecution for murder or complicity in murder," the committee said.

Jennifer Gibson, staff attorney at human rights NGO Reprieve, who also gave evidence to the Committee, said the report was a "wake-up call".

"Not only does the committee raise troubling questions about whether the Government 'misunderstood' the legal frameworks that apply, but it warns they may be at risk of prosecution for murder as a result," the report said.

"The UK's silence in the face of repeated questioning by the committee only further reinforces the very real danger that the UK is following the US down the slippery slope of kill lists and targeted killings. This is alarming, given the CIA's secret drone war has killed hundreds of civilians and been described as a ‘failed strategy' by Obama's own former head of defense intelligence."