A ceremony commemorating the memory of the Soviet people killed during the World War II was held near the Imperial War Museum in London.

LONDON (Sputnik) — A ceremony commemorating the memory of the Soviet people killed during the World War II took place on Monday in the UK capital, a RIA Novosti correspondent reported.

The ceremonial event held near the Imperial War Museum started with a speech of Russia's Ambassador to the United Kingdom Alexander Yakovenko, who said that no one should turn their back on history. 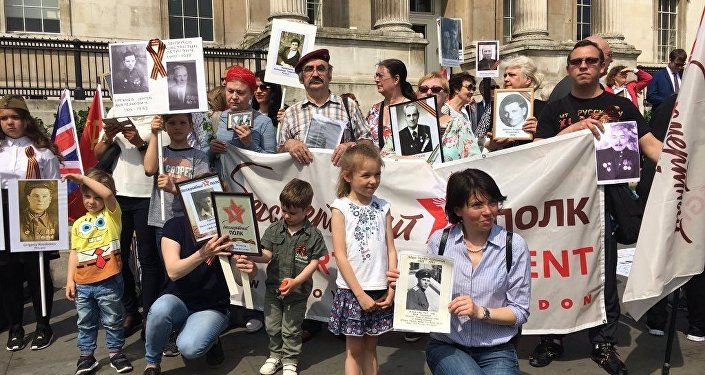 © Sputnik / Evgenia Filimianova
'Immortal Regiment' March Commemorating WWII Heroes Kicks Off in London
During the ceremony, flowers from Queen Elizabeth II, UK Defense Ministry and different non-governmental organizations were laid to the memorial of the Soviet citizens killed in the World War II.

Diplomats from the Commonwealth of Independent States (CIS) countries, as well as from other nations participated in the event.

Currently, London is hosting the Immortal Regiment march. Participants of the march are carrying photographs of their ancestors, who participated in the war, to honor WWII soldiers.

Organizers Invite People of All Nationalities to London 'Immortal Regiment'