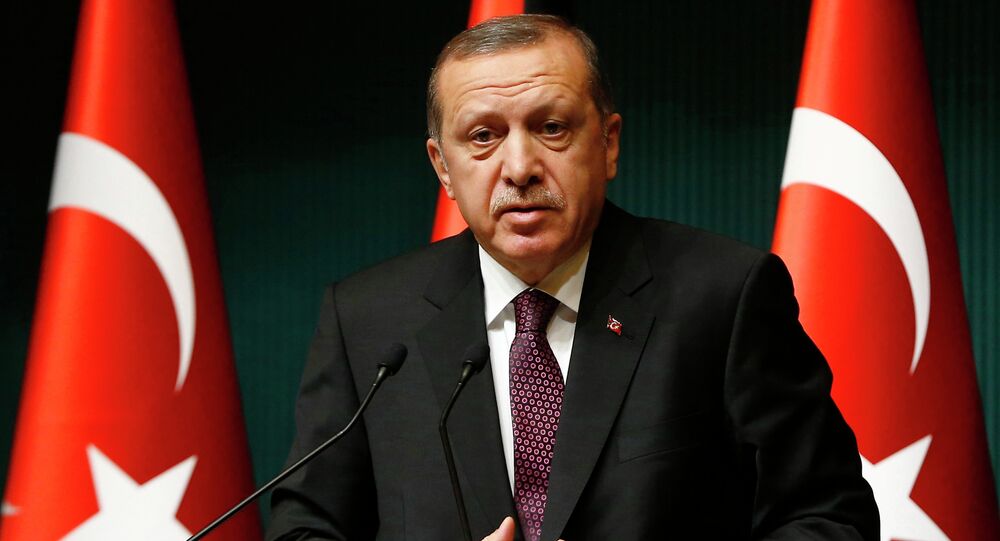 The Turkish President has reacted angrily to the European Commission after it insisted his government make changes to highly controversial anti-terror laws, as a condition of proposed visa-free travel in the EU.

In a speech in the city of Malatya, Turkey's President Erdogan said:

"On the question of visas, let those who call on Turkey to modify its anti-terrorism law start by removing tents set up by the terrorists at the doors of the European Parliament."

His comments are in reference to the presence of a group of Kurdish activists who protested in Brussels during March 2016.

​Erdogan's remarks are illustrative of the ongoing tensions between the Turkish government and organizations such as the Kurdistan Workers' Party (PKK), whose classification as a terrorist organization by Turkey and its allies remains contentious.

© REUTERS / Umit Bektas
Turkey in Turmoil as Erdogan, Davutoglu Split Over Syria, Europe
The President's outburst toward the EU follows a tumultuous week in Turkish politics, in which the Prime Minister Ahmet Davutoglu announced that he would be standing down for no apparent reason.

This fueled speculation that the President Erdogan may be working towards constitutional changes that would see his office gain far greater control of the executive branches of government.

Human rights campaigners have been vocal over Turkey's implementation of the so-called anti-terror laws, claiming they have been used as a means to curb free speech and dissenting journalism. The recent high profile case of journalist Can Dundar, who reported the transporting of arms from Turkey to Syria — resulting in a six years prison sentence — is increasingly representative of Turkey's attitude towards dissent.

International Human Rights lawyer Margaret Owen, told Sputnik that attacks on free speech in Turkey are worse than they've ever been.

​Visa relaxation between the EU and Turkey has often been touted as a likely precursor to the country's accession as a member state of the EU, a process over which President Erdogan has a surprising amount of leverage. This is because of Turkey's agreement to take in huge numbers of refugees fleeing to Europe. With that in mind, refusals to alter Turkey's anti-terror laws have been described as blackmail by European Council President Donald Tusk.

As Margaret Owen told Sputnik, Turkey has form on refusing to adhere to EU requirements, despite being a signatory to the EU Convention of Human rights:

"There's something called the Copenhagen Criteria, which are the conditions that states must comply with in order to be able to be accepted into the European Union, and Turkey has not complied with them."

​The EU-Turkey visa deal will need to be approved by 28 member states, and is technically contingent on a number of criteria on which Turkey falls short. However, Erdogan has repeatedly threatened to rescind any obligations regarding the refugee crisis, should the promised visa relaxation not go ahead.