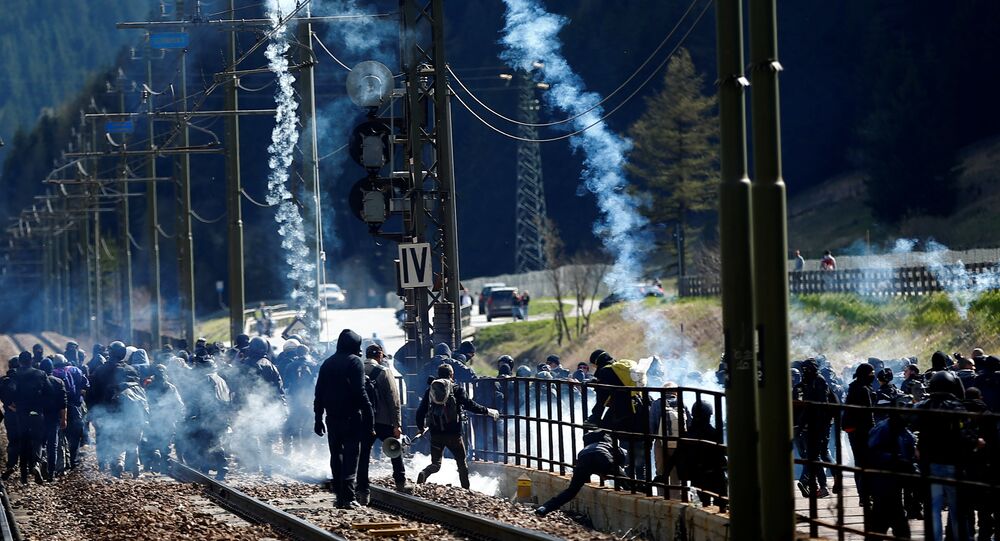 Italian pro-refugee and anti-police protesters used small explosive devices in a rally at the Brenner Pass on the Asutrian-Italian border on Saturday, the ANSA news agency reported.

ROME (Sputnik) — Earlier in the day, hundreds of members of the so-called Black Bloc — an Italian anarchist movement – as well as activists from Austria, Germany and Spain, gathered for a pro-refugee rally at the Brenner Pass, amid Vienna’s plans to build a fence to restrict migrant access through the crossing.

Italy’s military police, the Carabinieri, had to reportedly defend themselves against the Italian Left activists with batons and shields. Tear gas has also been used by the law enforcement, the ANSA news agency reported.

Clashes between police and the protesters have caused injuries to at least one police officer and resulted in dozens of demonstrators being arrested.

© Sputnik / Vasily Raksha
Is This Sparta? This is Asotthalom! Sputnik Patrols Hungarian Border Fence
According to the media, the demonstration had not been correctly registered and therefore is considered to be unlawful by the authorities of both countries. Attacks on journalists have also been reported.

The Brenner Pass, which is situated within the borderless Schengen zone, has been used by refugees and asylum seekers on route to wealthy northern European states. In late April, Austria's federal state police announced the country's plans to construct a fence at the Alpine crossing, as the country was seeking to prevent the arrival of undocumented migrants.

The UN refugee agency estimates that over 17,000 migrants arrived in Italy in the first three months of 2016 after crossing the Mediterranean Sea. Most of them are from the Middle East and North Africa.