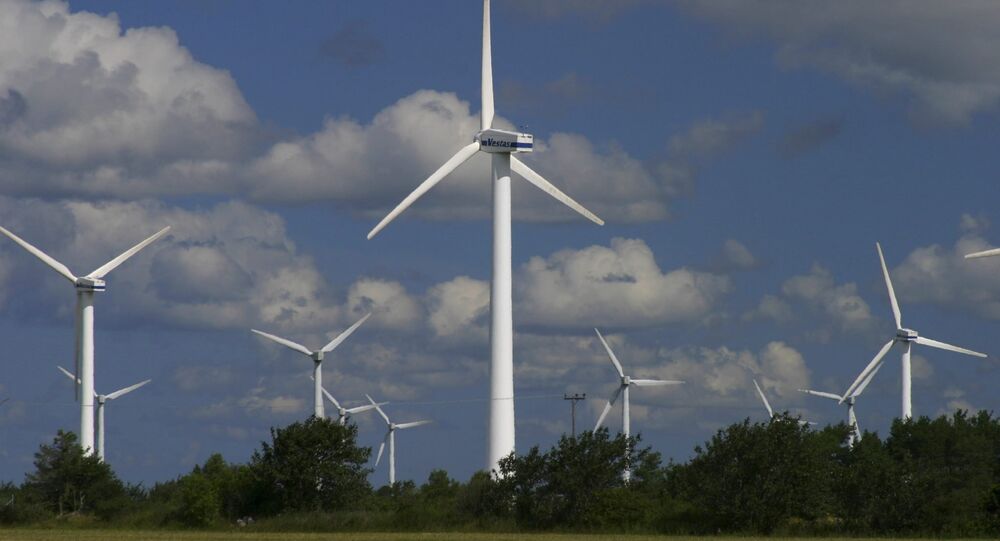 Despite renewable energy sources being heavily hyped as a sustainable solution to humanity's growing energy problem, actual support for the green power has been shrinking. Falling electricity prices and henceforth lower profitability have led a dramatic drop in investment in the Swedish wind energy sector.

© AFP 2021 / Jean-Christophe Verhaegen
Norway's iPad Only School Still Uses a Ton of Paper Each Year
Last year, investments into Sweden's wind power fell by a dramatic 40 percent, compared to the year before. Nevertheless, the total amount of investment over the next four years is estimated at approximately 21 billion krona (2.6 billion dollars), CEO of the wind power company Svensk Vindenergi Charlotte Unger told Swedish Radio. She also pointed out that the number of foreign investors is growing in comparison to local Swedes.

However, the overall outlook for wind energy remains rather dismal. Slumping electricity prices have forced individual owners to dismantle and sell older wind turbines, whereas the removal of state support may turn out to be a final blow to the industry.

According to an estimate by Erik Josefsson of the ES Power company, about 50 wind turbines were dismantled in Sweden and sold to other countries last year alone, Göteborgs-Posten reported. Josefsson noted that the opportunity to ease the financial burden was first seized by small-time players, such as individual farmers and small businesses.

© Flickr / BRICK 101
Weird Science: Sham Researchers Enjoy Tax Breaks in Denmark
Besides falling electricity prices, further development of wind energy has been hampered by a strong negative reaction in the neighborhoods set wind farm construction. Angry locals have complained about the humongous wind turbines ruining the rural landscape, whereas the long rotating shadows cast by propeller blades at sunset are a major irritant. Another significant complaint is the constant noise level experienced both outside and at home.

Besides, numerous health issues are another setback for the green energy. Local inhabitants, who live nearby wind farms, often complain of stress, headaches and insomnia.

According to Sture Åström of the environmental portal Klimatsans, the problem is the infrasound, i.e. noise of low frequency under 20 Hertz, which is not heard by the human ear, but nevertheless leaves an impact. "Health problems are very real," he wrote in a debate article in Folkbladet, claiming that the wind power industry is doomed anyway, because it cannot do without subsidies.

© Flickr / dtsomp
In the Red: Sweden Heading Towards Deep Economic Crisis
A possible, while likewise controversial solution is to create a fleet of mobile wind turbines at sea.

"Today, we may see beautiful pictures of wind turbines at sea, where they are not fixed to the ground. Now, there is a strong push against the industry to promote floating devices that are further out from the land with better wind conditions and that do not disturb nature in the same way," Magnus Westher, CEO of Ramnäs Bruk, told Swedish Radio.

At present, wind energy accounts for 5 and 2 percent of Sweden's and Norway's total electricity consumption respectively.

Fossil Fuels Could Be Phased Out in Just a Decade, New Study Claims