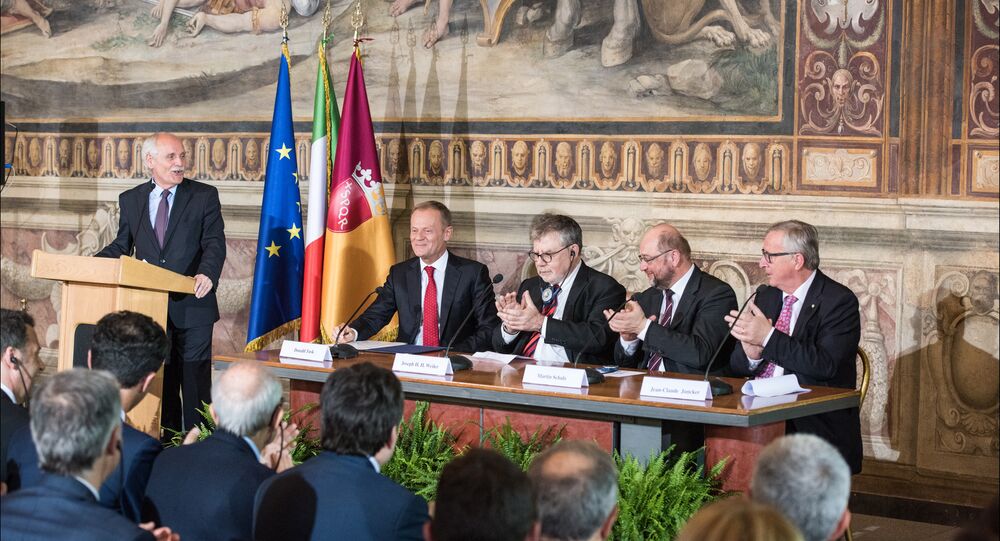 The President of the European Council Donald Tusk has admitted "the idea of one EU state, one vision ... was an illusion" while European Commission President Jean-Claude Juncker has conceded "we have too many part-time Europeans."

Their remarks echo those of European Parliament President Martin Schultz, who told a panel discussion on the 'State of the European Union':

"We have a lot of salesmen in the European Council and only a few statesmen."

The fact that the presidents of the three main institutions of the EU have issued such a dire commentary on the EU is a sign of the crisis within the union, which is struggling to reach any agreement on the migrant crisis, facing trouble within the Eurozone and a possible Brexit, which may precipitate other countries wanting to leave the EU as it currently stands.

Juncker said: "It was never easy. But what has changed is the general atmosphere and the personal beliefs and convictions of those being in charge of the European projects. In former times, we were working together, I remember the highly exciting period when we were preparing the Maastricht Treaty and when, step by step, we were moving into the direction of the single currency.

"Of course we had our debates. But nevertheless, there was this shared sentiment among the Finance Ministers — and later on the Prime Ministers — that we were in charge of a big piece of History. This has totally gone.

The EU is in deadlock over the migrant crisis, with many border controls being a breach of the Schengen zone and a fundamental principle of the EU — the free movement of people. There is deep division over the EU-Turkey migrant deal for the relocation of "irregular" migrants from Greece back to Turkey, which could pave the way for visa-free access for Turks into the EU.

The Eurozone is facing its own crisis, with Greece struggling to meet its bailout conditions and worries over the economies of some of the southern zone members. Many say the single currency will never work without a common fiscal and taxation policy, which is why the euro is seen as a dysfunctional currency.

Tusk — who was prime minister of Poland, which is now at odds with Brussels over controversial reforms brought in by the Law and Justice Party (PiS — led the talks to accommodate UK Prime Minister David Cameron's proposed reforms to the EU to prevent a Brexit.

"The idea of one EU state, one vision… was an illusion," Tusk said.

Schultz added: "The European Union was a promise of more opportunity, more chances, but the promise has not been kept."

Is This the End, My Friend? ‘EU Collapse Possible as Never Before’