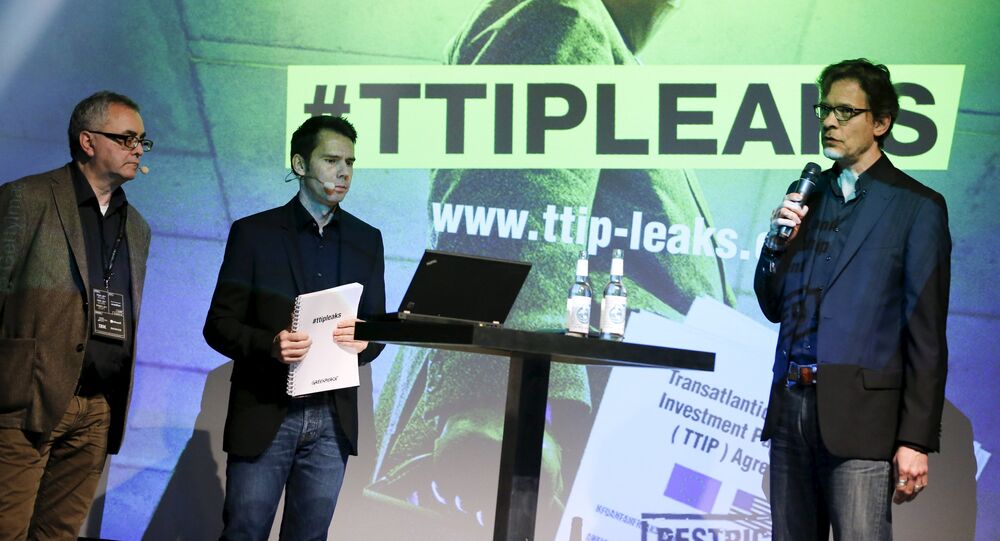 Reinhard Buetikofer, co-chair of the European Green Party, said that the most recent TTIP leak provides ample proof of fact the contradictions between the official positions of the United States and the European Union are far greater than the European Commission has ever publicly acknowledged.

© REUTERS / Fabrizio Bensch
German Economic Ministry Refuses to Comment on Leaked TTIP Documents
MOSCOW (Sputnik) — Brussels and Washington have more controversy in their negotiations on the Transatlantic Trade and Investment Partnership (TTIP) than has ever been publicly acknowledged by the European Commission, Reinhard Buetikofer, co-chair of the European Green Party, said Monday.

On Sunday, Greenpeace said it had obtained 248 pages of classified TTIP documents representing around two-thirds of the draft free trade agreement between the European Union and the United States. The documents expose the leading role of corporate interests in the proposed deal, as well as policies posing a threat to the environment and public health, according to Greenpeace.

"The most recent TTIP leak provides ample proof of one core fact: The contradictions between the official positions of both sides are far greater than the European Commission has ever publicly acknowledged," Buetikofer said, as quoted by the party's press release.

© Flickr / greensefa
Pressured Partnership: Leaked TTIP Papers Reveal US Drive to Get EU Markets
According to media reports on supposed leaks, the United States opposes the European principle which envisages that the products can be allowed for sale only if it is proved that they are not harmful to human health and the environment. Also, the United States reportedly requires the implementation of its practices which can lead to the fact that genetically modified foods and plants will spread across Europe.

"Without much stronger involvement of parliaments and the public the Commission seems to be incapable of negotiating on par with the US side and ready to violate all relevant red lines, even the weak ones which the European Parliament has expressed," Buetikofer added.

The TTIP trade deal aims to deregulate trade between the United States and the European Union, which together comprise 60 percent of global production.

The secretive deal has sparked widespread concern that it will lower environmental, health, safety, and workers’ rights standards, as well as enabling the extra-judicial settlement of disputes in circumvention of national sovereignty.