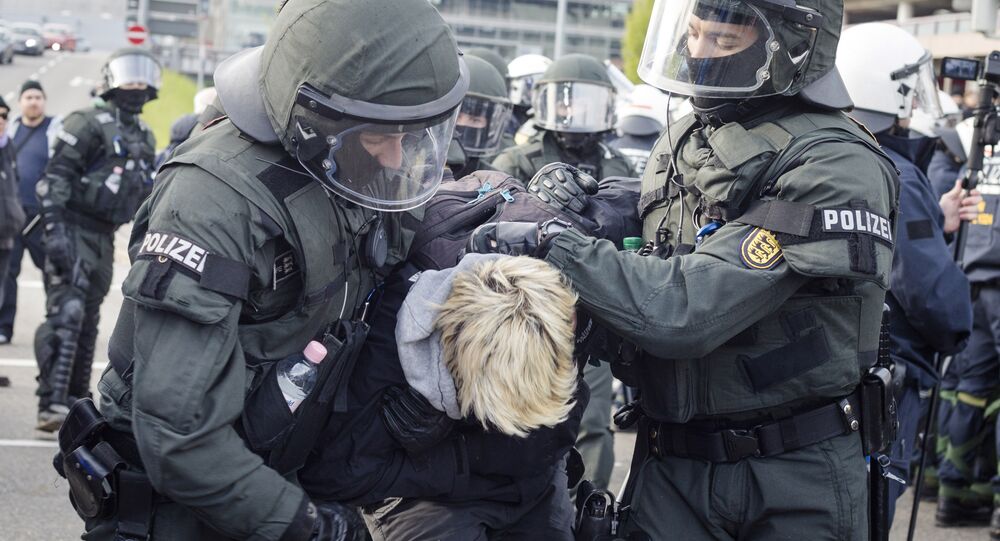 German police arrested some 400 protestors following clashes outside the Alternative for Germany (AfD) conference in Stuttgart on Saturday.

© AFP 2020 / John Macdougall
Frexit: Alternative for Germany Sees No Room for France in Ideal Eurozone
Some 1,500 left-wing protestors took part in demonstrations against the populist, right-wing, Alternative for Germany (AfD) in Stuttgart on Saturday, around 400 of whom were arrested after clashes with police, regional television channel SWR Fernsehen reported.

Shortly before 7am, "Many violent, masked, left-wing extremists attempted to gain entry to the exhibition center," and prevent the conference from taking place, a police spokesman told SWR Fernsehen.

Some of the protestors were armed with iron bars and planks of wood, and some attacked police with Bengal lights (a kind of firework), and flares.

Around 1,000 police officers had been stationed around the conference since dawn, equipped with water cannon. Eyewitnesses told SWR Fernsehen that the police used pepper spray to subdue some of the protestors.

© AFP 2020 / John MacDougall
Pan-EU Right-Wing in Sight? German AfD Party May Join Alliance With French National Front
Following the clashes with police in the vicinity of the conference, demonstrators moved their protests to local highways, in some cases blocking roads with burning tyres in an attempt to stop traffic from making its way to the conference.

The start of the AfD conference, at which the party is set to define its party manifesto ahead of Germany's federal elections next year, was delayed by one hour as a result of the protests.