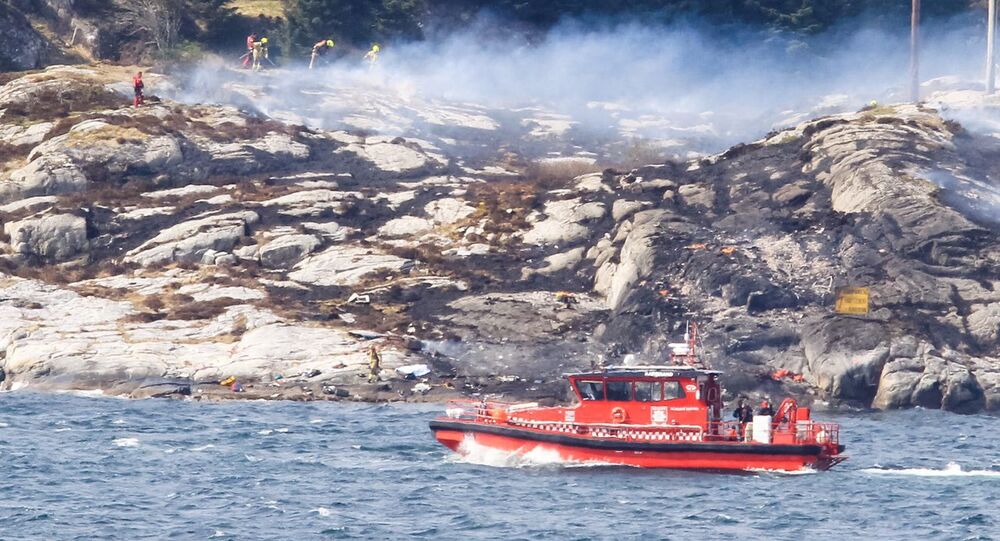 Flight recorders have been recovered from the crash site of an Airbus EC-225 helicopter off the Norway coast, officials announced Friday.

The helicopter, en route from a North Sea oil field to the western Norwegian city of Bergen, crashed on a small island 120 kilometers off the mainland earlier in the day. Local police stated the aircraft was “totally smashed." They alleged that it exploded after hitting the ground, as the thick smoke was seen at the site, according to AFP.

"It is a very small island and [helicopter] parts are spread partly on land, partly in the sea," Jon Sjursoe, of Norway’s Joint Rescue Coordination Center said.

Helicopter crashes near Norwegian city of Bergen with at least 14 people on board, reports of people in sea https://t.co/sYHrOoPxzg

​Civil Aviation Authority spokesperson Hege Aalstad confirmed that the flight recorder and the cockpit voice recorder have been recovered, but declined to give additional details. As of Friday, the cause of the tragedy remains unknown.

The state authorities confirmed all 13 people aboard the aircraft have been killed.

The rescue operation at the crash site was finished at 5 pm local time Friday, despite have recovered only 11 bodies. The officials stressed they didn’t “believe anyone can be found alive."

Today, we have been hit by a terrible tragedy, one of the most severe helicopter accidents in the history of the Norwegian oil industry.

​The helicopter was "on assignment” for the Norwegian oil and gas company Statoil ASA.  The company stated that 11 of the 13 people aboard were employees.