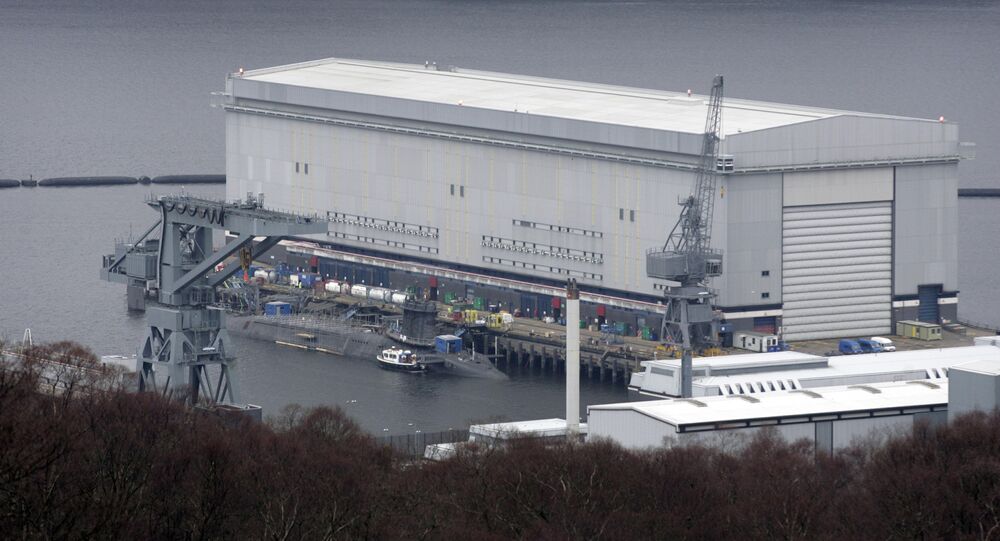 The political debate underway in Scotland over renewing the Trident nuclear arms program is "unnecessary" because the Tory-majority government will go ahead with it despite political pressure, the GMB trade union that represents workers at the Trident home base told Sputnik on Thursday.

"We think the debate over the renewal of Trident is unnecessary because the renewal of the Trident system is going to go through and there is nothing that can be influenced on that," GMB Scotland official spokesman Peter Welsh said.

According to the UK Defense Ministry, there are presently 6,800 military and civilian staff employed at the Faslane naval base, but that figure is expected to rise to 8,200 by 2022. The British government claims as many as 30,000 jobs are dependent upon Trident across the country.

GMB, which represents over 600,000 members in all types of jobs across the country, prepared a motion earlier this month to urge the Scottish Trades Union Congress (STUC) to reverse its opposition to Trident and back its renewal in a bid to secure Faslane jobs.

In a Wednesday interview with Scottish Television News, Dugdale said she was prepared to "guarantee" the jobs of those employed at the base even if the Trident program was not renewed, but when pressed could not say how many jobs that would be.

In a statement, Scottish Green Party’s Europe spokesman Ross Greer agreed that the Trident program must be scrapped but accused Labour of lacking a coherent policy on it.

"Yet again Labour are totally unable to come to anything like a coherent position on Trident. These weapons of indiscriminate slaughter are not just morally unacceptable, they are financially unjustifiable," Greer said Thursday.

"Scottish Greens are proud to have brought about the Scottish Parliament’s first vote against the nuclear weapons system, and we are equally proud of our opposition to the NATO nuclear club," Greer added.

"Scottish Labour's position on Trident is a complete farce," Davidson said in a statement. "It is lining up alongside the SNP [Scottish National Party] with an unworkable proposal which would only wreck our nation's defenses."

UK's Trident Is a Dinosaur of Mass Annihilation