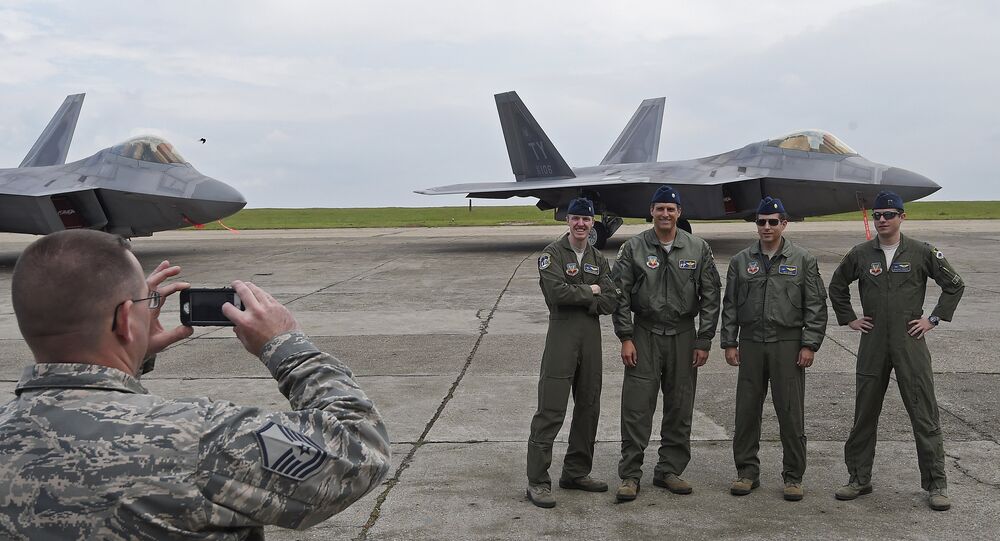 While both US and Romanian officials have confirmed that F-22 Raptors stationed this week at Mihail Kogalniceanu air base are meant to deter Russian "aggression," the pilots insist that they come in peace.

On Monday, the Pentagon deployed a pair of F-22 fighter jets to southeast Romania in an effort to deter hypothetical Russian aircraft.

© Flickr / US Pacific Command
Heavy Price Tag Weighs Down F-22: Fighter’s Cost Might Be Too Stiff for USAF to Handle

"[The F-22s seek to improve] the defense of Europe, the defense of the North-Atlantic Alliance, to improve the security in South Eastern-Europe…as a result of the aggression by Russia that has brought so much instability to this part of the world over the past two or three years," said US Ambassador Hans G. Klemm.

But, according to the pilots who landed at the Black Sea air base this week, their job is to merely support their NATO allies, not to goad Moscow.

"We’re not here to provoke anybody, we’re here to work with our allies," said pilot Dan Barina.

"The type of missions we run generally are offensive-defensive types of missions. You’re looking to be cool, calm and collected," added US pilot Rob Morgan after climbing down from his fighter.

"Our actions definitely do have greater consequences. We’re very, very careful with what we do. This mission planning that went into something like this was extensive."

The pilots also addressed the incident in the Baltic Sea, where the Pentagon accused Russian jets of flying "unsafe" maneuvers in the vicinity of the USS Donald Cook.

"I guess you can watch the video and see for yourself how those intercepts are," said Dan Naim, another F-22 pilot. "If you want to intercept people over international waters, we just want to encourage them to do that in a safe way."

On Monday, Romanian Air Force chief of staff Maj. Gen. Laurian Anastasof insisted that the American presence was necessary to defend against the proximity of Russian planes based in Crimea, which could "trigger worries of the [NATO] alliance."

He added that any unidentified aircraft operating within 20 miles of Romanian airspace "obliges us to scramble planes up in the air, a scenario that had already happened four times this year." Anastasof conceded, however, that none of these incidents involved Russian aircraft.

While Washington and its allies continue to accuse Russia of military aggression, it’s hard to ignore the fact that NATO has been steadily inching toward the Russian border. Earlier on Tuesday, Kremlin spokesman Dmitry Peskov reiterated his concern with the alliance’s growing military presence in eastern Europe.

"In regard to who is a threat to whom, it should not be forgotten what has been constantly heard over the last few years both from Brussels and from the members of the leadership of this organization, I mean NATO, concerning statements that it is Russia that they consider to be a threat," he said.

"And these statements are not limited by words alone, but also we see steps being made in boosting military potential and military expansion toward Russia’s borders, so here in this case it’s enough to take into account facts that are obvious."

Despite their “peace” mission, the F-22 pilots aren’t unaware of the potential for conflict.