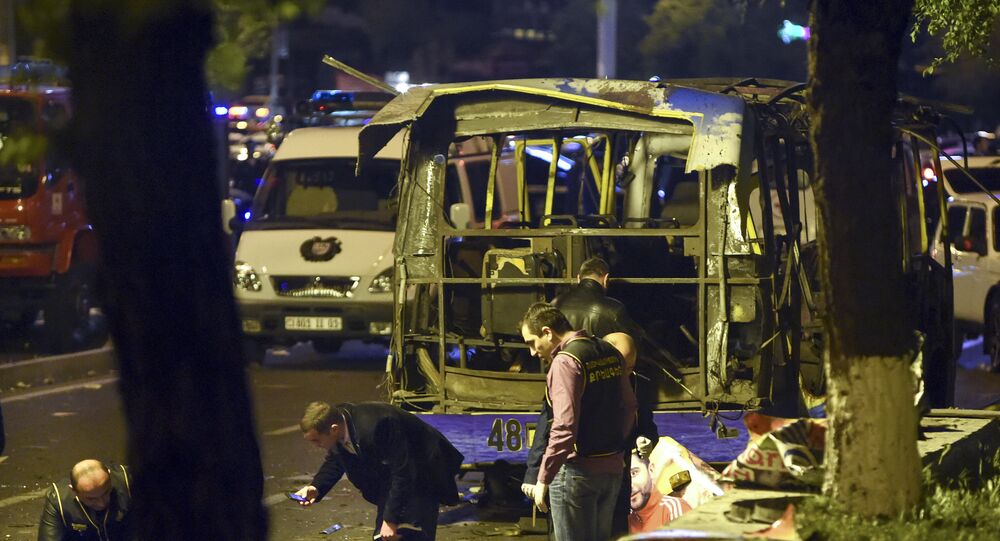 The Armenian Investigative Committee has not found any evidence to suggest that the recent explosion on a bus in the country's capital was a terrorist attack, the committee's press service said Tuesday.

YEREVAN (Sputnik) — On Monday, a bus exploded in downtown Yerevan, leaving two people dead and eight injured. The reason for the explosion has not yet been determined.

"No evidence to support a terrorist version [of events] has been found at the current stage of the preliminary investigation," the press service said.

The exact reason for the blast is yet to be determined, the committee's press service added.

© Photo : LiveLeak
Firefighter Cam Footage from Jerusalem Bus Bombing
The Investigative Committee has managed to identify the owner of a sim card that was found at the scene. He is a twice-convicted Armenian citizen. According to the press service, during a raid at the telephone owner's residence, investigators found TNT, a detonator and various electronic devices. Traces of TNT have also been found on samples retrieved during the examination of the bus.

The Armenian News Agency earlier cited Sona Truzyan, who is an adviser to the chairman of the Investigative Committee, that the owner of the mobile phone had had a dispute with his relatives and had threatened to blow them up using an explosive.