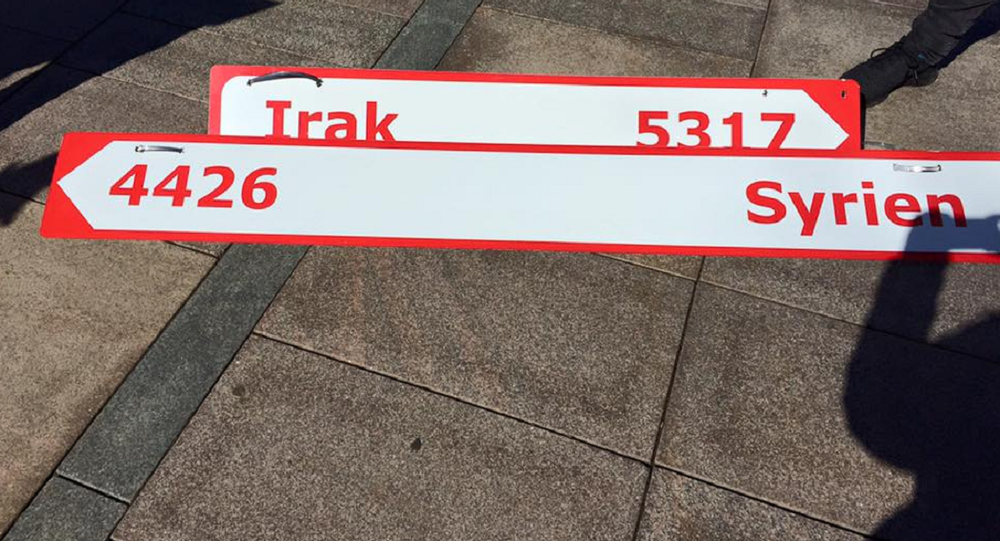 Provocative road signs showing the direction and distance to Syria and Iraq were set up in a Danish municipality, which has taken in the highest number of asylum seekers in the country. The initiative was branded "racist," and sparked a major debate about the refugees.

© AFP 2021 / LOUISA GOULIAMAKI
On Your Knees! Sweden Finds Bizarre Way to Deal With ‘Bearded Children'
The controversial signs ‘Syrien 4426' and ‘Irak 5317' with arrows showing the direction and distance were reported to have been anonymously set up on April 22. The incident took place in the municipality of Thisted in northern Denmark, which boasts six refugee centers housing 1,200 migrants.

Shortly afterwards, the signs were taken down by volunteers, but the action sparked a lively debate between supporters and opponents of refugee intake in Europe.

The nationalist Danes' Party claimed credit for the idea behind the signs on its website.

"The Danes' Party wants to show migrants the way back. Therefore, we have started a campaign in Thisted, where we will offer the locals an alternative to the insecurity that has occurred in the municipality after the arrival of the many migrants," said party leader Daniel Carlsen.

​The party didn't admit directly whether its members had placed the signs, which is an illegal act, but rather extended "a huge thank you" to those behind it. According to the party, the signs were necessary to stir a debate about the impact the asylum centers were having on the local community. They emphasized that the current debate would have "hardly had arisen without the road signs installed."

The signs did not go unnoticed by Thisted's vice mayor Ib Poulsen of The Danish People's Party.

"That's a fine initiative to start a debate," wrote Poulsen on his Facebook page as reported by Ekstra Bladet.

© Flickr / U.S. Department of Agriculture
A Price to Pay: Refugee Harvard Professor Warns Immigration is 'No Free Lunch'
Poulsen welcomed the approach to start a debate about how government allocates its resources in the refugee crises,

"We have a finance minister who said that the influx of migrants costs the economy 11 billion kroner (1,7 billion dollars) this year alone. It would have made a difference if we could use that money on welfare. I want to have a debate about the ways to spend the money on. This is as a way to generate debate on immigration, and it's fine by me," Poulsen told Ekstra Bladet.

According to the Danish Road Administration, the signs had no legal grounds to be installed.

"If you want a sign up on state roads, you must apply for it. This was not the case here," Søren Kjemtrup, the Head of the Danish Road Directorate, told Ekstra Bladet.

In the Facebook group "Welcome to refugees — No to the inhumane refugee policy," users were enraged by the signs, wrote the local newspaper Nordjyske.

"What an outrage! They should get a beating" was one of the comments.

Furthermore, the two women who took down the signs, Signe Ronn and Stine Holm of Thisted, were reported to have received death threats.

"In my world, it is so distasteful, degrading, humiliating and as racist as anything can be," Signe Rønn earlier told Limford Update, defending her stance.

Denmark remains one of the top destinations for asylum seekers. More than 20,000 refugees have claimed asylum in the country last year and some 25,000 are expected to arrive in 2016.