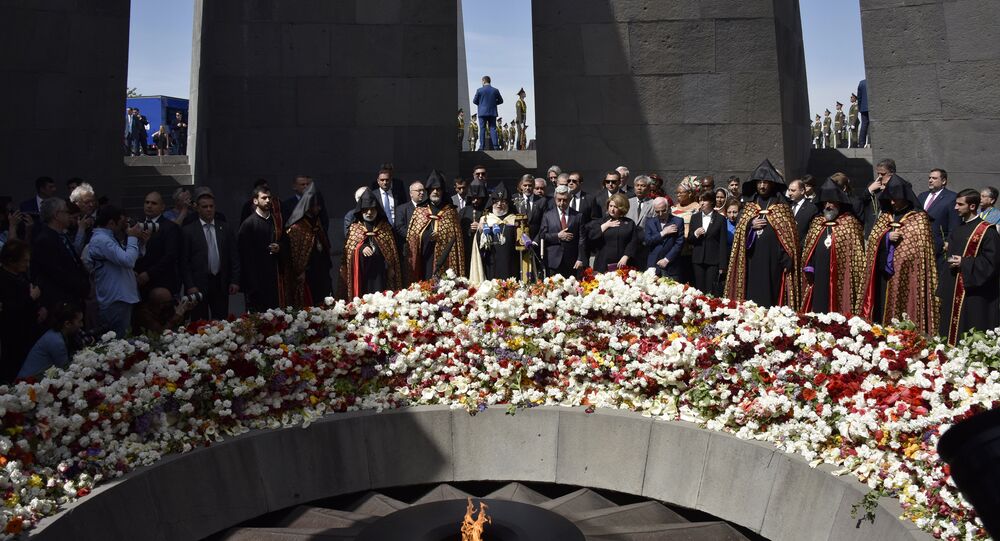 The Armenian leadership, including President Serzh Sargsyan and Prime Minister Hovik Abrahamyan, flanked by religious leaders and foreign guests, gathered at the Tsitsernakaberd memorial complex in Yerevan on Sunday to commemorate the 101st anniversary of the Armenian Genocide.

​Speaking to reporters on Sunday after paying tribute to the victims, Prime Minister Hovik Abrahamyan said that Armenia will continue to fight for the restoration of justice, emphasizing that "Turkish authorities must recognize the Armenian Genocide, the 101st anniversary of which we marked today."

"The sooner the Turkish leadership thinks about accepting the truth, the better. The world also has work to do regarding this issue," he added.

"It was the first genocide of the 20th century, and needs to be condemned by the whole world. This is the only way for the struggle of preventing genocides. We, by condemning this crime and commemorating the memory of the victims, must build our motherland in the future, as well as Nagorno-Karabakh, the second Armenian Republic."

"The process will be considered done when the Turkish leadership and Turkish people accept the genocide committed by their ancestors," Abrahamyan said.

​The Armenian Genocide has been recognized by over two dozen countries, including Russia. A century ago, together with France and Britain, Russia plainly called the events "a crime against humanity and civilization."

Numerous ceremonies are being held in Moscow and in other Russian cities to commemorate the sad occasion, with many of Russia's large Armenian community of three million participating.

Last year, speaking on behalf of the 100th anniversary of the genocide, Russian President Vladimir Putin emphasized that the event was "one of the greatest tragedies in human history," and that "the events of 1915 shook the entire world."

"Russia," Putin said, "felt these events as its own grief," and played a key role in securing international condemnation for the violence inflicted against the Armenian people. "Russia remains resolute in what has always been its consistent view that there is not and cannot be any justification for mass murder of any people."

Today, Putin emphasized, "the international community must do everything possible to ensure that these tragic events never happen again, so that all peoples can live in peace and harmony and do not have to know the horrors that arise from religious enmity, aggressive nationalism, and xenophobia."

© AP Photo
Armenian civilians escorted by Ottoman soldiers, being marched to a prison in southeastern Turkish city of Elazig, April 1915.

According to Armenian estimates, about 1.5 million ethnic Armenians were systematically killed, and over 600,000 driven from their homes, by the Ottoman government during and after the First World War. Modern-day Turkey, the successor of the Ottoman Empire, has refused to use the word genocide to refer to the massacre, saying that Turkish nationals were also among the victims.