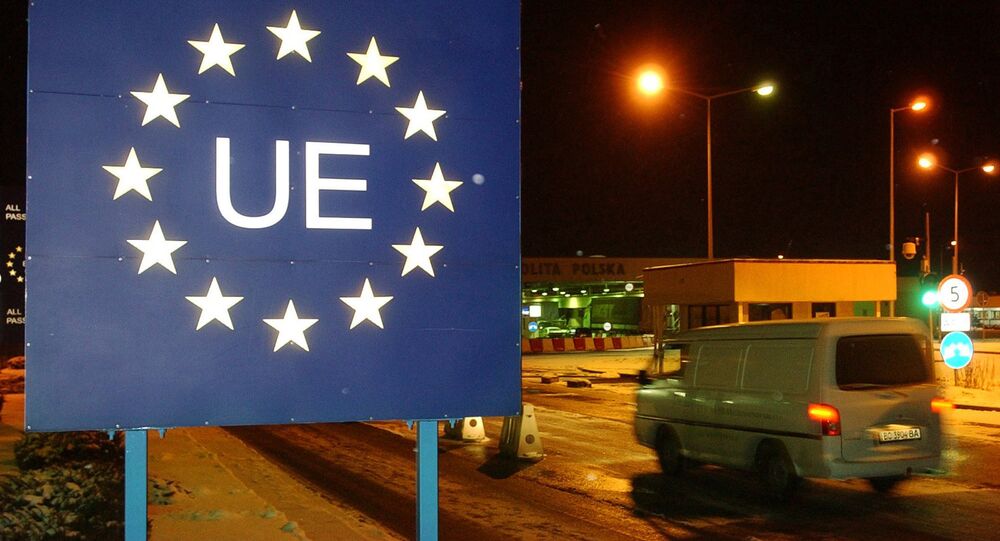 The dream of the Maidan revolutionaries -for Ukrainians to be able to travel to Europe without visas, has moved one step closer to reality, with the European Commission proposing to lift visa restrictions on Ukrainians. What might a visa-free regime between Ukraine and the European Union look like for Ukrainians and Europeans? Sputnik investigates.

Speaking at a press conference in the Ukrainian capital earlier this week, Johannes Hahn, the Commissioner for European Neighborhood Policy and Enlargement Negotiations, announced that the EU-Ukraine Agreement on Association has 'preliminarily taken effect', 'preliminarily' because of the Dutch referendum, where Dutch voters chose to reject the treaty 61% to 38%.

On May 11, the EU's Justice and Home Affairs Council is set to consider the liberalization of the visa regime for Ukrainians. More importantly, the European Commission's proposal will now need the backing of the EU's member states, as well as that of the European Parliament.

© Sputnik / Vitaliy Belousov
Stratfor: Political Infighting in Ukraine Could Resume Despite Leadership Change
If approved, the agreement would formally grant Ukraine's 42 million citizens the right to visit Europe's Schengen Area for 90 days without a visa.

Commenting on the European Commission announcement, independent Russian newspaper Svobodnaya Pressa suggested that if the EU approves the EC's proposal, one thing is clear: many Ukrainians "will not throw away the opportunity to make a dash from Ukraine. Mass unemployment in the country is growing (officially it stands at 11.5%; unofficially, nearly a quarter of the working population sits idle), and these people need to feed their families. Up to now, [a considerable number] went to work in Russia, but this does not fit into the ideological fabric of the new regime."

Officially, European officials have repeatedly emphasized, Ukrainians will not be allowed to work. Unofficially, all bets are off. "Ukraine's migrant workers will have the whole of Europe at their feet, and if the wave of Ukrainians rushing to the Old World catches up with the wave of refugees from the Middle East, this will turn into a tsunami. Does Brussels understand this?"

Speaking to the newspaper, Moscow State University political science professor Andrei Manoilo explained that unfortunately, while Europe "may understand perfectly well all the consequences of this step, it cannot do anything about it, because the US is insisting on it, and resisting Washington is not something Europe is capable of. It simply does not have the strength, nor the leaders, to defend its own position."

© AFP 2019 / ALEKSEY CHERNYSHEV
Set The Record Straight: French FM Ayrault is Angry at Kiev for Sabotaging Peace Process in Donbass
The agreement on European Association, and the corresponding visa-free travel regime, was not decided by referendums, Manoilo recalled. "Instead it was taken by parliaments where for the most part, officials are members of European elites cultivated for a long time by the United States. It is well known how the Americans work with Western elites; how they find young, promising talented politicians, and nurture them, invite them for internships, provide them with 'guidance'," etc.

"Therefore the decision made by this pro-American elite is absolutely understandable, and could not have been otherwise."

In any case, Manoilo warns, the European Commission's decision, if approved by European governments, would lead to new social problems for a continent already struggling from a faulty immigration policy. "The visa-free regime offered to Kiev would open the flood-gates for a massive outflow of Ukrainians, ready to go anywhere to escape their own country, which is like a leaky barge that is quickly sinking."

Ukrainians, the political scientist notes, will go to Europe in the hopes of finding work or receiving allowances, "and the first conflict that will arise will be between the new Ukrainian migrants and representatives of those nationalities [including Poles and Balts] who now work as porters, dishwashers, cleaners and so on in Western Europe."

Such conflicts for jobs, the political scientist recalls, have already been taking place, on a smaller scale, in Poland, Hungary and Romania, to which Ukrainians, particularly men escaping last year's conscription campaigns, have already fled. "And now, if one considers that the flow of Ukrainian migrants will be massive, these problems will reach a colossal scale."

Furthermore, "it's also important to understand that Ukrainian migration would flow to areas which migrants from other areas, including the Middle East and North Africa, consider their turf. They have their own enclaves, bases of support, systems of coordination and control. And they believe that they have firmly occupied a niche allowing them to exist at the expense of their host countries – to receive benefits, free housing, medical care, etc." If someone else, some 'other' migrant group comes in, "it will result in direct clashes between the two streams of migrants, and nobody knows how such a conflict might end."

© AFP 2019 / GENYA SAVILOV
Here We Go Again…Ukraine's New Parliament Speaker Wants to Cut Ties With Russia
Ultimately, Manoilo notes, for those Ukrainians who would seek to use the visa-free arrangement for its intended purpose – to travel freely throughout Europe, this agreement is presently close to useless, because the vast majority of Ukrainians simply do not have the means. "Given the current exchange rate of the hryvnia against the dollar, and especially the euro, Ukrainians do not have the money to survive in Europe for even a short period of time after arriving there."

As far as the dangers of migrant radicalism are concerned, the political scientist warns that "the EU, in opening its borders to Ukrainian migration, may find itself in a situation where Europe is divided into spheres of influence between Ukrainian ultranationalist and Islamist groups. After all, those who fought in the Donbass in punitive nationalist battalions don't know how to do anything else except to fight, rob and kill. And naturally, they too will go to Europe in search of a better life…"

For his part, Alexei Kuznetsov, the head of the Center for European Studies at the Moscow-based Institute of World Economy and International Relations, suggests that it's important not to overdramatize the situation.

"Ukrainian migrants have one advantage over their Arab counterparts, who have a hard time integrating into European society: The Ukrainians can do so more easily, taking unattractive jobs not wanted by the locals – that is, those jobs that do not require any special skills – working at a construction site, in services, etc."

Furthermore, Kuznetsov suggested, the situation is not as disastrous as some analysts warn. "The visa-free regime can always be canceled.  That is, if the Europeans feel that everything is going badly, they will try to rectify the situation and reintroduce the visa regime."

© Sputnik / Stringer
Drama Continues: Ukraine May Break Up Into ‘Several Quasi-States’ by Year End
Vadim Trukhachev, professor of the Department of Foreign Regions at the Russian State University for the Humanities, told Svobodnaya Pressa that whatever the risks, and they are not insignificant, European leaders appear to be trying to offer Ukraine's leadership at least one policy success following the major economic, social and political losses which resulted in the aftermath of the 2014 Maidan coup, which European leaders helped to sponsor.

The dangers, according to the analyst, include "an increase in the number of illegally employed persons, the simplification of procedures for persons with a criminal past and present to enter Europe, the growth in smuggling of everything from weapons from the Donbass combat zone to cigarettes and alcohol. Nevertheless, the EU's leadership now considers it more important to support Ukraine's leaders. Otherwise, they would show that the whole 'Maidan' was begun in vain."

"For now we are talking about an initiative by the European Commission. This body is, incidentally, not responsible to voters, and so is free to initiate whatever it likes – even a flight to Jupiter. The proposal must first be considered by the European Council, composed of European heads of state, and by the European Parliament, consisted of elected MPs. We should await the views of these two institutions before drawing any conclusions."

Ultimately, Gorodnenko suggests, "Kiev apparently asked for the EU to give it a piece of paper –at least one pleasant word to smooth over the bitter pill of the Dutch referendum. Europe has demonstrated that it is not afraid to spare empty promises."