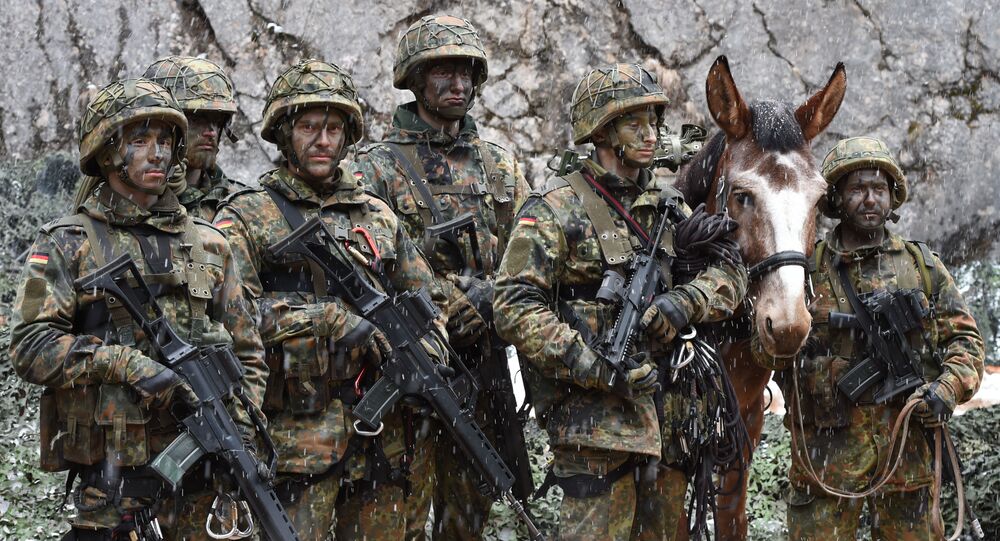 German renowned author and playwright Rolf Hochhuth, who recently turned 85, has urged his country to exit NATO for the sake of its own future, otherwise it is running the risk of being destroyed, as the most populous NATO contingent and Pentagon’s "weak-willed satellite", he told Sputnik.

© REUTERS / Yves Herman
Broken Dreams: EU's Hopes on NATO Partnership With US May Be Shattered
Sputnik Deutschland has sat down with Hochhuth to discuss his new book "Ausstieg aus der Nato oder Finis Germaniae" (Exit from NATO or the end of Germany) and what he implied by such a provocative title.

"With it I wanted to say that the Americans, as was recently claimed by a Swedish high-ranking military official, will soon launch their planned war against Russia, which will result in the destruction of us Germans, as the most populous NATO contingent and Pentagon’s weak-willed satellite," Hochhuth told Sputnik.

"I wrote the whole book to confirm that I am not just panic-stricken, but my panic is based on facts," he added.

The above statement comes as a comment to the warning of a Swedish top military commander that World War III was on the horizon and that Sweden would be at war with another country within years.

Major General Anders Brannstrom wrote in his January statement to his country's soldiers that they will be going to war "within a few years," possibly with Russia, and even went as far as telling them that World War III is around the corner.

© AFP 2021 / JOHN MACDOUGALL
The Lives of Other NATO Members: Germany Spied on its Allies Until Mid-2013
"The global situation we are experiencing and which is also made clear by the strategic decision leads to the conclusion that we could be at war within a few years," Brannstrom then said.

Rolf Hochhuth also cited as an example NATO military parade in the Estonian city of Narva in February 2015, just a couple of hundred meters, not even kilometers, from the border with Russia.

The author said that back then Chancellor Angela Merkel was able to prohibit Germany from taking part in the occasion but she was unable to prevent Germany’s participation in the joint NATO naval drills in the Black Sea later in March 2015, not far from Russia’s Crimea peninsula.

"Why isn’t she holding her naval drill in Gibraltar," Hochhuth wondered. "And why has a German battleship taken part in the drills?"

With regards to Crimea, the author cited Helmut Schmidt, former West German chancellor, who died in November last year, as saying some two weeks before his death:

"Stop, at last, with your worthless sanctions! Neither Crimea nor Ukraine have even been sovereign entities!"

"Why do we, Germans, need this Crimea?" Hochhuth wonders.

© AFP 2021 / JOHN MACDOUGALL
No NATO, No Cry? Germany to Withdraw Patriot Missiles From Turkey Border
"We are the only nation which has twice gone up to Crimea within 26 years," he said referring to German occupation of the peninsula during First and Second World Wars and subsequent defeat of the German army.

"Probably we should abstain from doing it for the third time. Or are we going crazy?" he wondered.

Hochhuth also cited as an example the reaction of former German Chancellor Helmut Kohl, who was outraged with NATO working out a scenario of destroying the German cities of Dresden and Potsdam with atom bombs for the sake of Americans, and demanded to drop the plan in its entirety.

The plan has been stopped, the author said, but there is no guarantee that NATO won’t continue with ideas like this.

"Chancellor Merkel, of course, does not foresee such a development, but we are deprived of independence" he added.

In the German Cabinet of Ministers there is only one man of honor, Hochhuth said, and it is Wolfgang Schäuble, Minister of Finance, who fatalistically admitted that Germany has to put up with the fact that it is not a sovereign state.