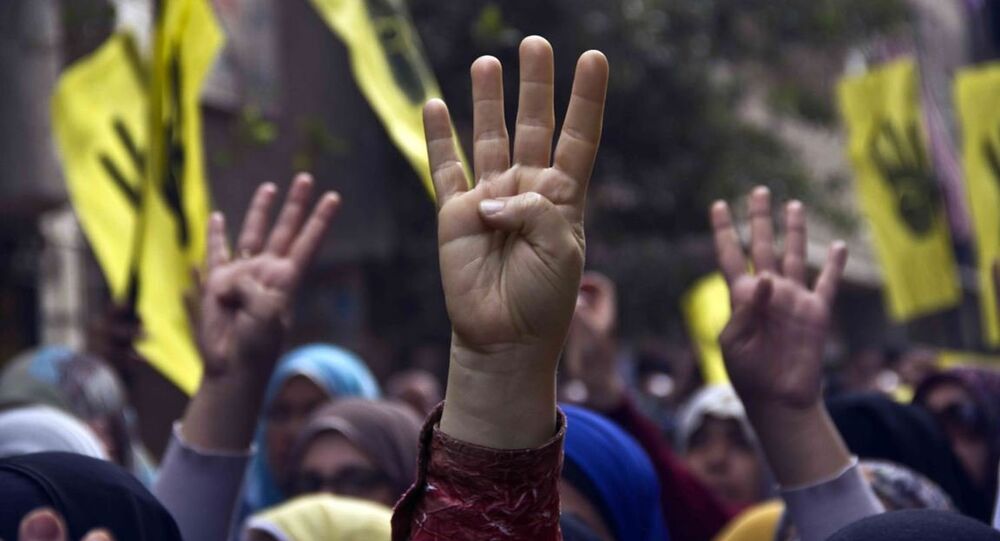 Sweden's green party Housing Minister Mehmet Kaplan was photographed dining with Turkish ethnic supremacists and has been forced to leave office in disgrace.

Last week, leaked photographs revealed Sweden's Housing Minister Mehmet Kaplan of the Green Party dining with members of the Grey Wolves, a far-right wing, neo-fascist Turkish supremacist organization which has been responsible for hundreds of killings of liberal activists and intellectuals during its 50-year history. Following the media outrage, Kaplan, who had earlier provoked a row with his anti-Semitic comments, had to tender his resignation.

The notorious greeting was made during a demonstration held in April 2014 in support of the Muslim Brotherhood in Egypt, a former Islamist party of power, which was overthrown in a military coup in the summer of 2013. In December 2013, the party was declared a terrorist organization in a court ruling. The party's figurehead Mohamed Morsi was arrested and sentenced to death in May last year. Tens of thousands of Islamists have since then been arrested and put behind bars.

© AFP 2021 / HENRIK MONTGOMERY / SCANPIX SWEDEN
Strange Bedfellows: Swedish Minister Dines With Turkish Neo-Nazis
​In the spring of 2014, Kaplan participated in a demonstration of protest against Egypt's crackdown against the Islamists in Egypt, voicing support for the Muslim Brotherhood and sporting the Rabia sign, a gesture of greeting used by Islamists.

The notorious gesture was brought into the light by Hanif Bali of Sweden's Moderate Party, who admitted to being tipped off about the video (now deleted) via the social media, Fria Tider reported. The Iranian-born Swedish politician has developed a reputation as a consistent and outspoken critic of Islamism.

© Flickr / Anders Henrikson
No Break for Swedish Greens: Nazi Diners, 9/11 and Handshake Row
Meanwhile, the Islamist tangle grew to incriminate more participants, as the Social Democrats' parliamentary candidate Hasan Dölek, former president of the Turkish National Association, has been found out to have had contacts with Ilhan Senturk, leader of the Grey Wolves' Swedish branch, Aktuellt Focus wrote.

Ivar Arpi then proceeded to retweet a series of photos of Swedish politicians, brandishing the Rabia sign, among them Young Muslims' chairman Rashid Musa and Green Youth's spokesman in Malmö Salahaden Raoof

​​Also this week, Yasri Khan of the Green party and secretary general of the organization Swedish Muslims for Peace and Justice, which voiced support for Kaplan, had to resign in light of a media outrage over his refusal to shake hands with a female reporter on grounds that it violated his Muslims faith.