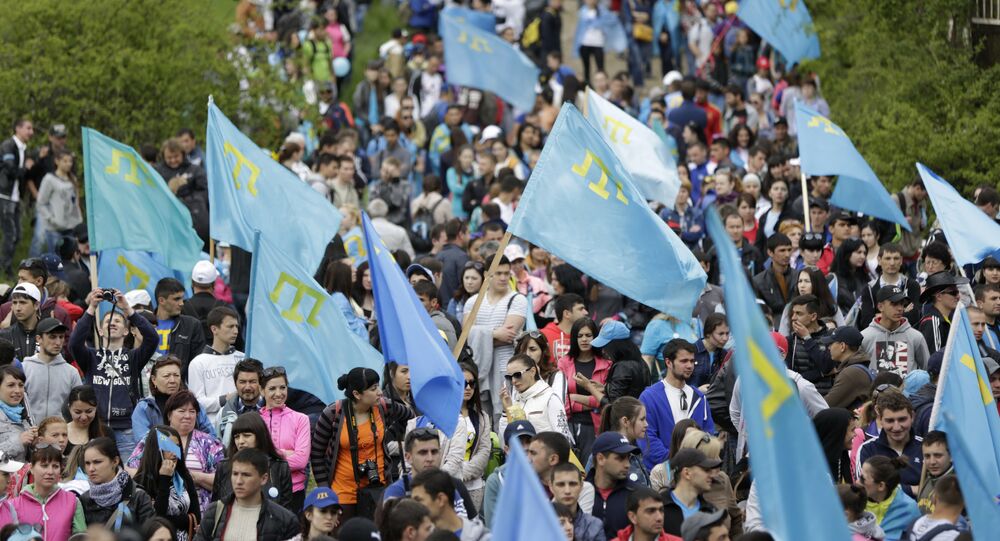 The creation of a Crimean Tatar autonomous region in southern Ukraine would further destabilize the country and put in danger the lives of peaceful Tatar populations both in Crimea and Ukraine, Unver Sel, the head of the Turkish Federation of Crimean Tatar Communities, told Sputnik.

© Sputnik / Yori Lashov
In Putin We Trust! Crimean Tatars Slam Turkey Over Aggressive Stance Towards Russia
Turkish media is actively discussing the issue of possibly creating a Crimean Tatar autonomous region in the Southern Kherson Region of Ukraine, right next to Crimea. The Crimean Tatar autonomy in Ukraine would have their own military units, likely comprised of foreign mercenaries and other radicals from around the world.

Sel believes that a Crimean Tatar autonomy and the further rise of Tatar military brigades would lead to a big disaster in Ukraine:

"Giving Crimean Tatars autonomy in the Kherson Region of Ukraine will be a serious threat, especially for peaceful Crimean Tatars living both in Kherson and Crimea, as well as other communities in the region."

Interestingly, when Crimea was a part of Ukraine, nobody had ever talked about giving the Tatars autonomy. And now it has suddenly changed.

"The ongoing active discussion of this issue today looks like some kind of geopolitical game," Sel told Sputnik.

© Sputnik / Max Vetrov
Most Crimean Tatars Have Returned Since Referendum
"We can all see what these kinds of militant groups turned Syria to," Sel said. He added that since the situation in Eastern Ukraine is already unstable, the emergence of these batallions will lead to more chaos in the region.

Although some experts claim that the Turkish government provides direct support to these Crimean-Tatar military groups, Ankara denies it.

If Turkey starts to openly support Crimean-Tatar militants in Ukraine it would be a problem for Ankara and the government knows it.

Moreover, the Crimean Tatar diaspora living in Turkey opposes the political meddling in southern Ukraine and is against Ankara's alleged support of Crimean Tatar militants.