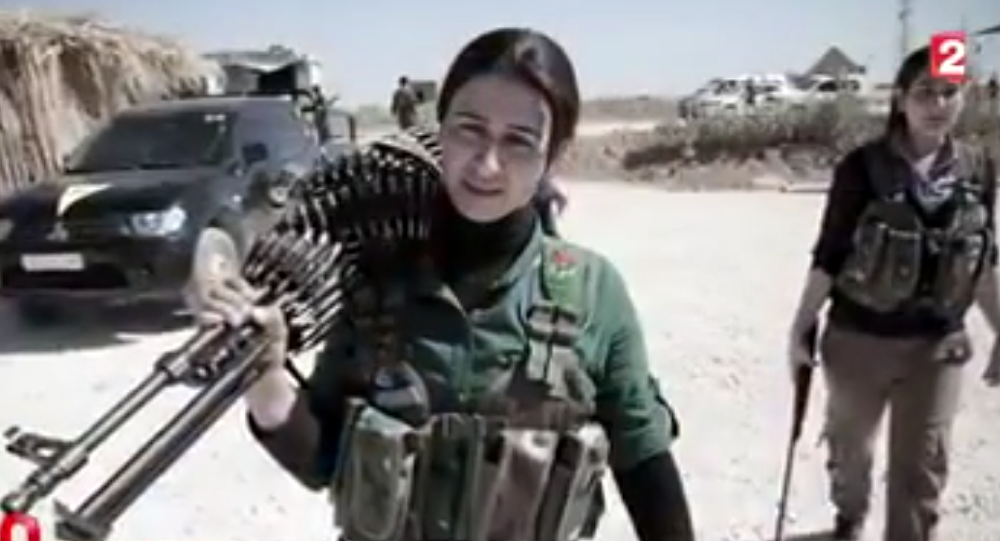 Your garden variety jihadist dreams of dying as a martyr, as he is then supposed to proceed to a life in paradise. But should he be slain by a woman, there is no paradise in store. Thus, the Kurdish Women's Protection Units (YPJ), the female equivalent of YPG, are the worst nightmare for terrorists fighting in Syria.

© AFP 2019 / LEHTIKUVA / Markku Ulander
Young Guns: Scandinavia Begins to Wise Up to Radicalized Youth
Nasrin Abdullah, supreme commander of the YPJ which numbers nearly 10,000 female warriors, is currently visiting Sweden. During her stay in the Nordic country, she will meet with politicians and government officials, as well as people who supported the Kurds through fundraising and relief efforts.

Sweden has already been helping the Kurdish forces in northern Iraq with information sharing and military expertise. Nasrin Abdullah voiced hope that the Kurdish militia in northern Syria would be able to get similar support as well.

"Daesh is the enemy that the Kurdish and the Swedish people have in common. I hope we will be able to achieve a good cooperation with Sweden in the battle against terrorism," Nasrin Abdullah told Swedish Radio last week, at the same time warning Europe of upcoming Daesh attacks.

© Flickr / Alex Berger
Is Denmark Staking on Kurds in the War Against Daesh?
"For their purpose of attacking Europe, Daesh has formed special units. They consist mostly of jihadists who have just joined in from Europe," she said, warning of particular cruelty from European-bred recruits.

"Jihadists joining Daesh from Europe grow into the organization's cadre and are groomed to become professional terrorists. Most of the suicide attacks and decapitations we have seen have been carried out by European recruits," Nasrin Abdullah said during her visit to Sweden, a country that has contributed the second highest number of Daesh terrorists per capita in Europe, second only to Belgium.

According to Foreign Minister Margot Wallström, Sweden is siding with the opposition in the Syrian civil war. Nasrin Abdullah believes this is a strange decision, as only a fraction of the opposition is actually striving for human rights. The so-called opposition has no actual power, she maintains, but are puppets to countries like Saudi Arabia, Turkey and Qatar, Abdullah said to the Gävle newspaper Gefle Dagblad.

"Should they prevail in Syria, there would hardly be any difference to the Assad regime. The opposition does not believe in democracy, human rights, equality and freedom," she said.

© Sputnik / Andrey Stenin
Danish Parliament Approves Expansion of Military Mission Against Daesh
Since the EU, including Sweden, has been vocally supportive of the opposition, Nasrin Abdullah went on to ask the West a direct question.

"Does your silence mean that you actually condone the attacks carried out against the Kurds and other ethnic groups in Rojava [a de facto autonomous Kurdish region in northern Syria]? If not, it is time you took a stance," she said.

Nasrin Abdullah directed harsh criticism against Turkey and maintained that they have no interest to end the Syrian war.

"They are simply using the refugee crisis for blackmailing the EU," she said, referring to EU's three billion euro aid package to allegedly ease the refugee crisis. Moreover, the EU has been warming up to the prospects of Turkey's membership in the union.

"If they were to embrace Turkey a member in the current situation, it would mean that the EU trampled on values of equality, freedom, democracy and so on," concluded Nasrin Abdullah.

Earlier this week, Rojava, a Kurdish-dominated autonomous area of 4.6 million inhabitants in northern Syria, was reported to be open a representative office in Sweden's neighbor country Denmark in a few weeks.