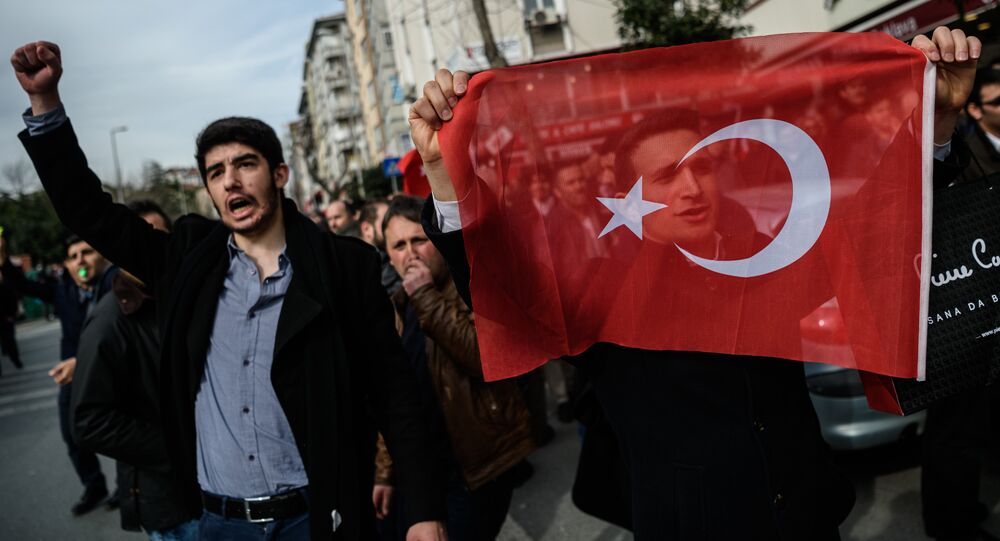 Next Stop Civil War? Turkish Society on the Edge

Turkey has entered a period of high tension and the government needs to act quickly to consolidate the society their people and power before things get out of control, the US Henry Marshall Foundation warned, citing an article by Dr. Emre Erdogan who is the founding partner of Infakto Research Workshop in Istanbul.

“Turkish politics is one existential struggle that goes on forever,” Dr. Erdogan wrote in his article titled “‘Turkey: The Force of Division.”’
He added that the level of polarization of Turkish society had reached a degree that rules out any reason for optimism.

Citing the results of a survey by the US-based Marshall Fund, Dr. Erdogan pointed to a civil conflict brewing up in the country with 44 percent of respondents naming the Kurdish People's Democratic Party as the main irritant, followed by the ruling Justice and Development Party with 22 percent.

© AP Photo / Lefteris Pitarakis
Land of One Man: 'Turkey is Not a Democracy' as It is Devoid of 'All Rights and Freedoms'
Eighty-three percent were opposed to having someone with dissenting political views as a family member. Seventy-eight percent said they would never do business with a dissident and seventy-four percent would not let their kids play with the children of their political opponents.

President Recep Tayyip Erdogan enjoyed the support of 47 percent of those polled, while only 15 percent of opposition-minded respondents backed his policies.

President Erdogan remains popular among the country’s civil servants and those in the military and security organizations, with 75 percent of those in the armed forces endorsing his line.

“Some of the abovementioned factors have to do with consistent conflicts happening in our society,” Dr. Emre Erdogan wrote.

In a recent interview with Radio Sputnik, former Attorney General of the Supreme Administrative Court of the Republic of Turkey, Tansel Çölaşan, spoke about the violation of human rights and freedoms in the country.