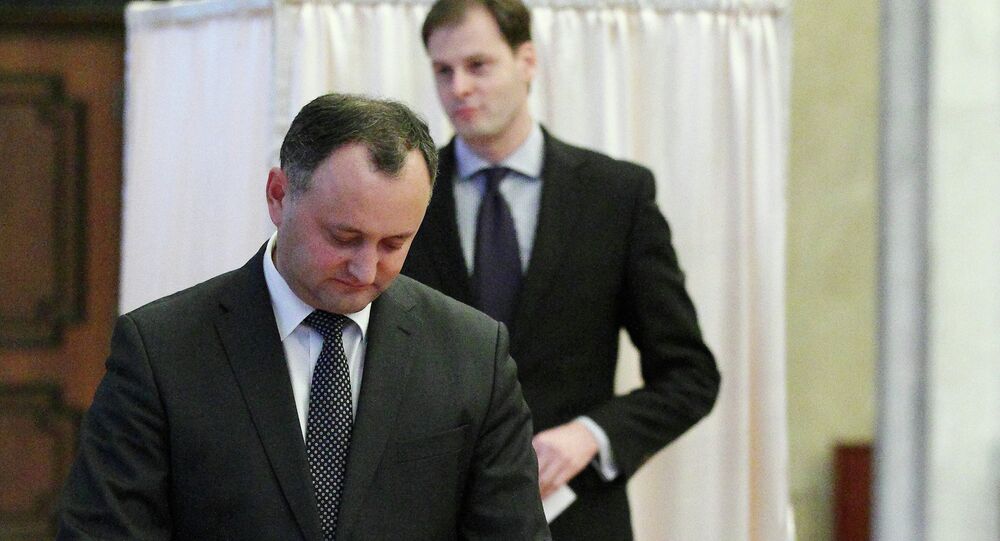 The Socialist Party of Moldova is going to initiate a vote of no-confidence to the country’s government by the end of May so that early parliamentary elections are held simultaneously with the presidential ones, Igor Dodon, the party’s leader, said Monday.

CHISINAU (Sputnik) – The Moldovan Parliament declared earlier in April that direct presidential elections would be held in the country on October 30. The decision was passed by a majority vote in the legislative body.

"So that on the day of the presidential elections, early parliamentary elections are held, it is necessary to ensure the dissolution of the legislature. And this should take place no later than in August 2016," Dodon said at a press conference in the French city of Strasbourg.

From the constitutional point of view, the fastest way for the parliament’s dissolution is the resignation of the government, he noted.

"In this respect the Socialist Party [the largest faction represented in the republic’s 101-seat parliament] will initiate a vote of no-confidence to the government by the end of May to ask for the resignation of the Cabinet of [Pavel] Filip," Dodon stressed.

© Sputnik / SpuMiroslav Rotar
Rallies Held Across Moldova, Protesters Demand Snap Elections
The Moldovan capital has been engulfed in protests since September 2015. A coalition of opposition forces — Socialists, Our Party and the Civic Platform Dignity and Truth (DA) — has been demanding the resignation of the Moldovan president, the prime minister and the chief prosecutor, while also calling for early parliamentary elections and prompt action to tackle corruption.

In October 2015, the country's Cabinet of Ministers, headed by Valery Strelet, was dismissed. Moldova entered the year 2016 with no acting government against the backdrop of a deep political crisis.

In January, Filip from Moldova’s Democratic Party, was appointed to the post of Moldovan prime minister, which also caused a wave of disapproval among the opposition and resulted in mass protests.

Moldova to Elect President on October 30