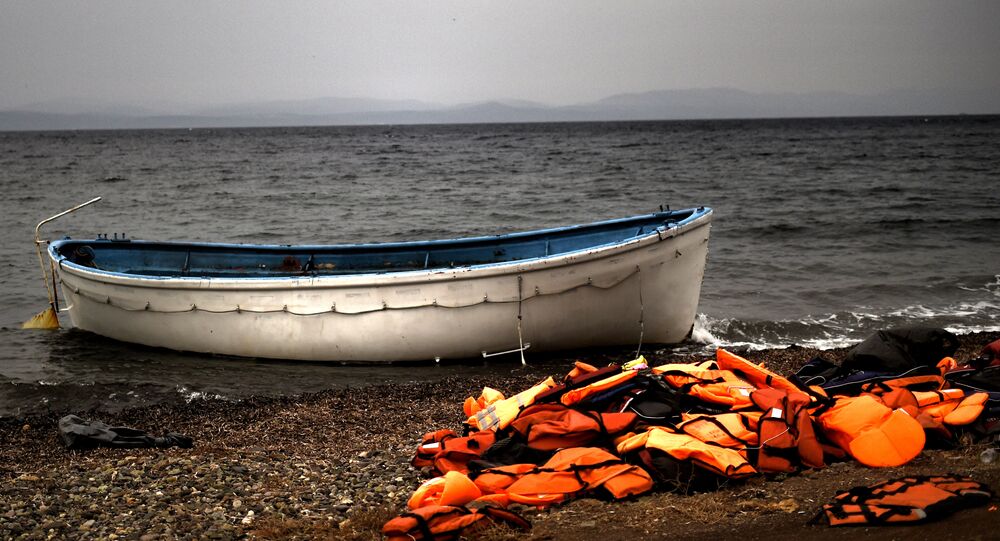 The European Union has been accused of complicity in the deaths of refugees and migrants who drowned in the Mediterranean Sea after EU policy makers decided to cut rescue operations fully aware of the lethal consequence it would have.

Transcripts and minutes from meetings have been scrutinized by academics from Goldsmiths and York university revealing "shocking findings" that the EU's own assessment of replacing Mare Nostrum with Triton would increase the number of deaths at sea — yet they chose to go ahead and implement the policy anyway.

"The findings are shocking," Lorenzo Pezzani, co-author of report 'Death by Rescue: The Lethal Effects of the EU's Policies of Non-Assistance at Sea' told Sputnik.

The researchers from the Center for Research Architecture at Goldsmiths and York found that a previously unreported 2014 Frontex internal assessment on "talking migrant flows" said:

"It has to be stressed that the withdrawal of naval assets from the area, if not properly planned and announced well in advance, would likely result in a higher number of fatalities."

The Italian government decided to end its search and rescue Mare Nostrum mission in October 2014. It was replaced by Triton, managed by the EU's border force agency Frontex.

The report is based on field work, special analysis and policy forensics, looking at the minutiae of European Policy documents, meetings and minutes.

"Our report sheds new light on the consequences on the EU's decision to cut back on search and rescue operations which left a huge gap in its rescue abilities and shifted the burden of responsibility in dangerous regions to large commercial vessels," Pezzani says.

"These ships are not equipped to carry out dangerous rescue operations… The crew don't have specific training, there are usually only 10 or 20 people on board and the very structure of the ship is not adequate to carry out rescue operations of migrant boats, which are overcrowded and unseaworthy."

"Blame can obviously be pointed at the people smugglers but we should not forget the response of the EU created a policy to rescue passengers using a cargo ship which led to the death of those people. It crashed and capsized and only 28 people survived, more than 800 died," Pezzani said.

"Another shipwreck was caused when a cargo ship was navigating towards a migrant boat causing the passengers to become agitated, so they all moved to one side and the boat capsized.

"Professional search and rescue teams have specific protocol to avoid this. That doesn't' mean that a professional team will avoid death in all certainly — but what is clear is many deaths could have been avoided — and these are just two of a range of cases we analyzed."

On 12 April 2015, 400 people died when an overcrowded boat capsized. Six days later, another 800 migrants drowned in water that became known as the Mediterranean graveyard.

"The most striking finding in the report is that the EU was aware that cutting back search and rescue operations was likely to cause massive deaths — but nothing was done to address this problem," Pezzani reveals.

"Our assessment found that the EU chose deterrents over the lives of migrants — making crossings more dangerous and more difficult in the hope it would reduce the numbers crossing the Mediterranean.

"I find it difficult to understand why the EU would not allow people to arrive safely on its territory unless it is motivated by racism and xenophobia?" Pezzani told Sputink.

"Even the deployment of Mare Nostrum didn't manage to bring the mortality down; the only factor that did, was when more people traveled along the Western Balkan route and crossed the Aegean Sea which is shorter and less dangerous."

The authors conclude that safe and legal pathways to Europe are urgently needed.

"This is the only solution that will stop migrants from dying at sea," Pezzani said, adding that: "This really seems the most reasonable thing to do."