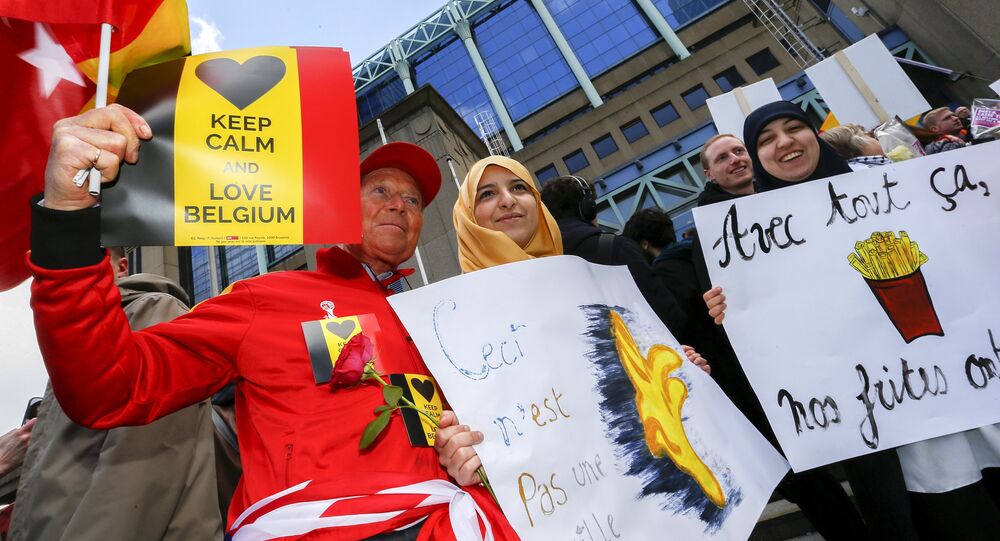 Thousands of people are taking part in the march against terror and hatred in Brussels on Sunday to commemorate victims of recent attacks, local media reported.

More than 3,000 people took to the streets of Brussels, Belgium to join the "March against terror and hatred," to commemorate victims of the recent attacks, local media reported, citing sources in law enforcement.

​Protesters were not allowed to have bags or backpacks with them and were warned to have ID cards and to keep silent. Some of them marched with their children. Muslims were also involved in the procession.

Start of #Brussels march against terrorism in #Molenbeek, more than 7000 people came in total #tousensemble pic.twitter.com/gxCXqwMfPY

​There was no information about the possible participation of radical groups such as those that had staged an impromptu demonstration on March 27.

Keep calm and love #Belgium seems to be unofficial slogan of #Brussels march solidarity march in memory of 22 03. pic.twitter.com/APG3xoFzke

Some 15,000 people were expected by local police to join the procession, Belgian newspaper Le Soir said.

​The march was promoted by 160 Belgian community organizations, which called on citizens to gather on Sunday in honor of the March 22 terrorist attacks' victims, as well as to establish a sense of community solidarity amid the threat of further incidents.

The procession will conclude on the square near the Brussels stock exchange building. Some of the participants, including those who were injured in the attacks, will have a performance.

More than 8000 people march in #brussels against terror and hate pic.twitter.com/aqZcVtkRUZ

​​People were laying flowers in memory of the attacks' victims.

Not such a huge turnout so far for this Brussels peace march pic.twitter.com/XtOBYsJrPm

The march in Brussels was originally scheduled to take place on March 27, but was postponed by organizers after warnings of a possible threat in the city.

Brussels and Belgium as a whole are attempting to recover from the March 22 suicide bombings at Brussels Airport and a central metro station that left 32 dead and over 300 injured.

'Terrible': Rally 'Against Fear' in Brussels Cancelled Over Attack Concerns