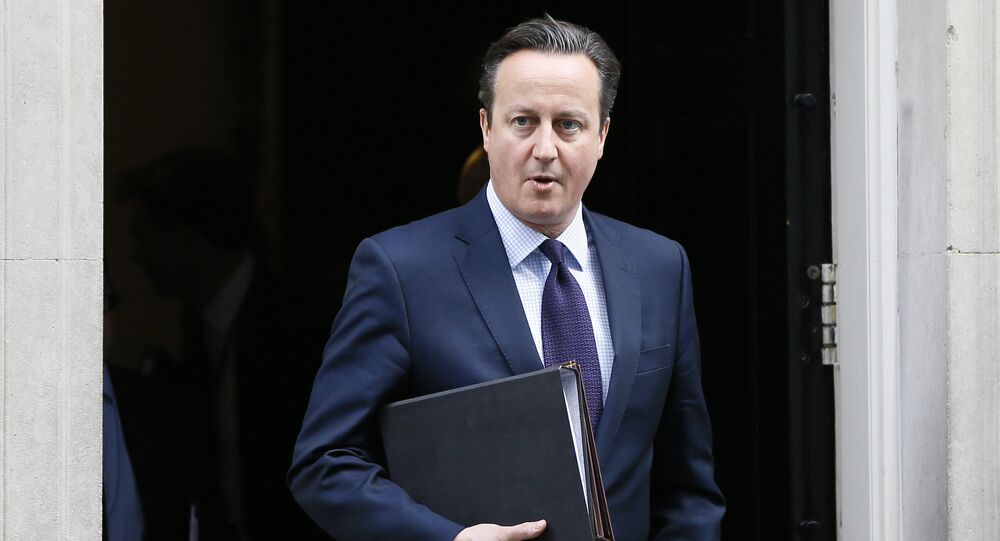 UK Prime Minister David Cameron said on Monday he would announce new laws to crack down on tax cheats in response to criticism from the opposition lawmakers over possible tax avoidance.

MOSCOW (Sputnik) — Initially, the move to toughen the laws dealing with tax evasion and loss was introduced in March 2015 as Treasury Secretary George Osborne was introducing the monthly budget. The UK government then pledged to issue "more accelerated" payments notices to those who hold out from paying the tax that is owed.

"This Government has done more than any other to take action against corruption in all its forms but we will go further…That is why we will legislate this year to hold companies who fail to stop their employees facilitating tax evasion criminally liable," Cameron was quoted by the Sky News broadcaster as saying.

© REUTERS / Neil Hall
Cameron Releases His Hundreds of Thousands of Dollars Income Data
On Saturday, Cameron's office revealed that he had been given a 200,000-pound ($282,500) gift by his mother after his father’s death, possibly avoiding inheritance tax. The following day, UK Labour Party leader Jeremy Corbyn said that the prime minister should be questioned over potential tax evasion by the Standards and Privileges Committee, a parliamentary watchdog.

Other documents published by the Downing Street showed that Cameron paid over 400,000 pounds in tax on an income of nearly 1 million pounds between 2009 and 2015.

The revelations come amid a reported leak of the trove of over 11.5 million files about alleged tax havens schemes and involvement in them of a number of former and current world leaders and other individuals. In particular, the leak suggested that Cameron's father, Ian Cameron, was a director of the offshore investment fund Blairmore Holdings, run from the Bahamas. The prime minister's first reaction was to deny owning any shares, dismissing it as a private matter.

Cameron Slammed for Jumping the Gun on Brexit Referendum Campaign