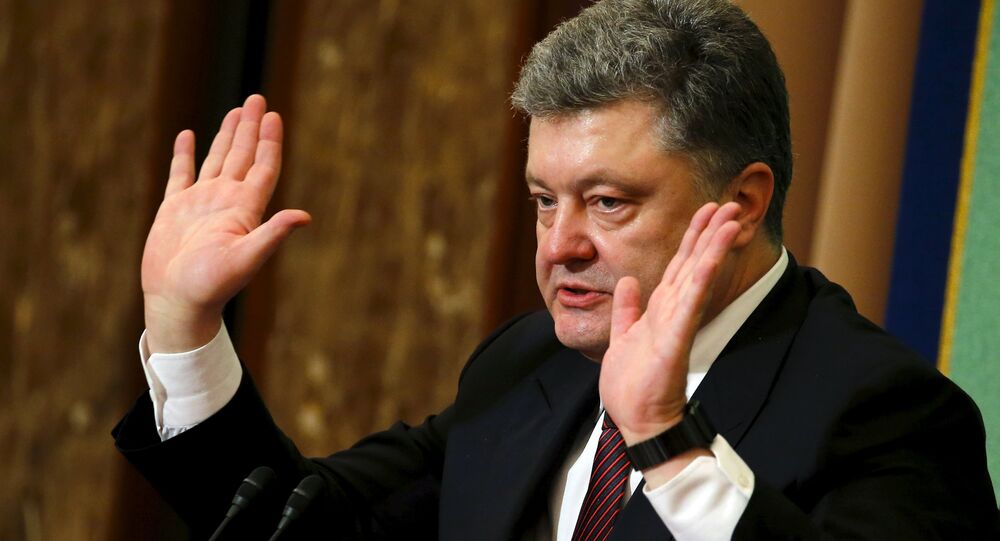 According to Zerkalo Nedeli, Poroshenko happens to be a beneficiary and partial owner of companies in Kiev, Dnepropetrovsk, Kirovograd, Poltava and Vinnitsa regions. Moreover, “the President’s agro-industrial enterprises are as big as his confectionery ones,” the newspaper wrote, adding to the list a number of “major construction projects,” owned by the Ukrainian leader.

“Petro Poroshenko has never relinquished control of his businesses and lobbied their interests when he was a Verkhovna Rada deputy, a Foreign Minister and Economics Minister. Looking back on his career as a civil servant and a politician one can only wonder how he managed to develop his businesses and set up offshore companies without bending the law,” the newspaper wrote.

© AP Photo / Mindaugas Kulbis
Poroshenko Claims to be Preparing Reforms to Make Offshores Impossible
On April 3, Germany’s Sueddeutsche Zeitung daily published a huge leak of confidential documents from one of the world's most secretive companies, the Panamanian law firm Mossack Fonseca, revealed how the world’s rich and powerful use tax havens to hide their wealth.

Mossack Fonseca, however, has refused to validate the information contained in the leaks and accused reporters of gaining unauthorized access to its proprietary documents. The company warned that using unlawfully-obtained data was a crime that it would not hesitate to seek punishment by legal means.

According to the leaked documents made public by the International Consortium for Investigative Journalism, Petro Poroshenko allegedly set up an offshore company on the Virgin Islands in 2014.

Poroshenko denied the claim and said he would welcome any probe of any offshore activity anywhere.

The Avellum law firm, which had been engaged in the preparation of the Ukrainian president's share in Roshen Confectionery Corporation for the sale and transfer to a blind trust, said that the offshore company was part of a corporate restructuring to help sell Poroshenko’s Roshen confectionery group.

Although the president is the shareholder, they said his shares are managed by a licensed asset management company and have been held by an independently managed fund.

Roshen Corporation is a Ukrainian confectionery group controlled by Petro Poroshenko. It is the leading manufacturer of confectionery products in the country which operates also owns facilities in Lithuania, Hungary and Russia. When running for president, Petro Poroshenko promised that, if elected, he would sell Roshen, but he still owns it.