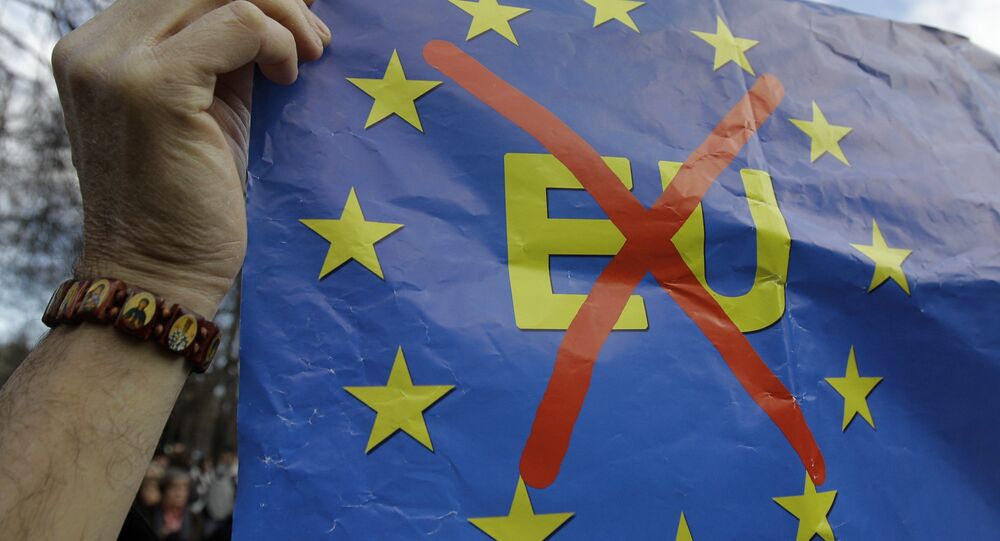 All Aboard the EUexit Express: 1 in 3 French Look Forward to Frexit

A new poll conducted by French online magazine Causeur has found that Euroskepticism in France is growing, and that one in three French look forward to France's exit from the European Union; moreover, 53 percent of respondents said that they were opposed to France's continued membership in the Schengen area.

© REUTERS / Cris Toala Olivares
Dutch Ukraine-EU Referendum Results Put a 'Nexit' on the Horizon
The poll, conducted for Causeur by the French Institute of Public Opinion, a French polling and market research poll, indicated that while "the French are not (yet?) willing to leave the EU," they do want France out of Europe's common border-control free zone, known as Schengen.

The three question poll, with a sample size of 2003 men and women aged 18 or older, was conducted between March 11-15. 34% of those polled said that they were opposed to France's continued membership in the EU, with 66% saying they were in favor of the country remaining in the supranational union.

Moreover, when asked about whether they are in favor or opposed to France's continued membership in the Schengen Area, a majority of respondents, 53%, said that they were opposed, with 47% saying they were in favor. This is important, the magazine suggested, since the polling was taken before the Brussels terror attacks.

© Photo : causeur.fr
"Are you in favor or opposed to France remaining in the Schengen area of the free movement of persons?" Blue: Opposed; Orange: In favor
© AFP 2021 / Ben Stansall
Support for UK's Remaining Within EU Marginally Leads by 1% - Poll
Commenting on the results, Causeur explained that 25-64 year old working class French were the most heavily opposed to both the EU and the Schengen area; business people, officials and the middle class viewed both institutions much more favorably.

"Politically, these people [who are opposed to the EU] feel closer to the National Front (78% of their supporters voted in favor of a Frexit), but also include supporters from the Left Front (which jives with the fact that nearly one in three voters of [Left Party founder] Jean-Luc Melenchon are in favor of EU exit)." For the record, the Left Front electoral federation is opposed to President Francois Hollande and his Socialist government.

Ultimately, adding their own two cents of political commentary, Causeur suggested that "our survey demonstrates, to those who may have had their doubts, that Europe today has two options: to finally protect its citizens (from terrorism, uncontrolled immigration, deindustrialization, unemployment, globalization) or to disappear; not all at once, but to slowly dissolving into a deep, turbulent history."

#Hugabrit Love-Bomb Campaign Explodes in Emotional Plea to Save Brexit

Dutch Ukraine-EU Referendum Results Put a 'Nexit' on the Horizon

Support for UK's Remaining Within EU Marginally Leads by 1% - Poll